National has undershot every one of its growth promises. I bet that doesn’t stop them promising big tomorrow. 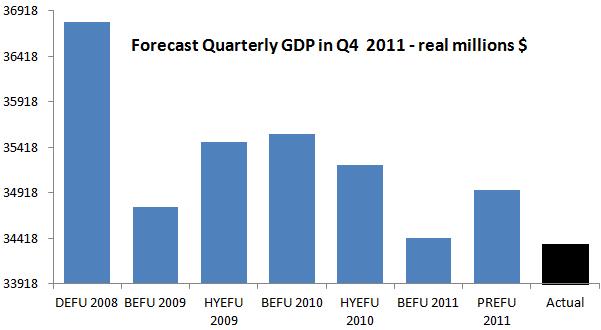 Apparently, it’s going to be more ‘jam tomorrow’ with strong growth promised for 2013/14.

I’m picking that there’s been a sea change; people are sick of this con. If Key and English once again promise jam after three years of delivering crumbs, it will just undermine their already damaged economic credibility.

[Just a note, Audrey Young suggests David Parker was wrong when he said average annual growth under National has been 0.6% because two economists said growth since National came to power has been 1.5%. They’re both right because they’re measuring differently. Year/year growth has averaged 0.6% between 2008 and 2011, and Q4 2011 was 1.5% larger than Q3 2008. It’s important when fact-checking to make sure you’re checking the same fact.

For comparison, population growth has averaged 1% a year, totaling 3% under National.]

15 comments on “Failure to deliver ”