Fire at Will coming to your workplace

As of April 1 next year, I’m going to be a whole lot less confident moving to a new job. If I do, I’ll probably find the new contract gives the boss the right to fire me without giving me the right to justice if the firing is unfair. Reducing workers’ confidence to change jobs is just one of the stupid consequences of universal Fire at Will. 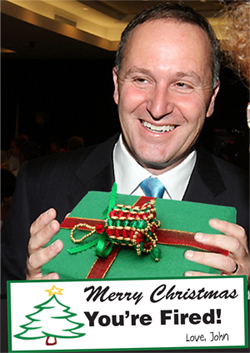 As we’re already seeing, removing the right of employees to natural justice and their right to access the courts if they believe their dismissal is unjustified results in bad bosses treating their workers appallingly. The CTU has released numerous stories of workers losing their livelihoods because of Fire at Will and I know personally of half a dozen other cases where the worker has refused to go public. It’s just the beginning.

They say that Fire at Will will only be by agreement between the boss and the worker but the reality is that bosses will be allowed to make Fire at Will a condition of employment and with quarter of a million jobless Kiwis which worker is going to be able to walk away from a job offer because it includes the Fire at Will provision?

And when you start a job with Fire at Will, will you be willing to speak up about poor health and safety conditions? Will you stand up to your boss if a co-worker is being mistreated? Will you demand your entitlements if the boss underpays you? Will you confront a boss about sexual harassment or discrimination? Will you be brave enough to join a union?

All these things will become very hard to do now because the boss can just turn around and fire you for ‘performance issues’ and you will have no right to contest that dismissal in court.

A whole lot of workers will simply not take the risk of changing jobs. Hardly the recipe for a dynamic workforce.

Let’s not pretend that Fire at Will and the other anti-worker changes (blocking your union rep’s access to your workplace, requiring doctor’s notes for one day’s sick leave) are anything more than ways of weakening the power of labour to bargain with capital. It’s all about ensuring that wages and conditions get worse and National’s base gets to pocket more cash.

It’s short-termist and ultimately self-defeating, of course, because you end up with low-income consumers and an unmotivated, inflexible workforce but when has capitalism ever been about the long-term?

33 comments on “Fire at Will coming to your workplace ”