Posts Tagged ‘fire at will’

90 day trial – no lie too outrageous for National

For eight long years National have been telling us that the 90 day trial (fire at will) law was all about creating jobs. Yesterday a new Treasury report showed that it had failed to do so. RNZ: “The government now says its 90-day trial period was never about increasing the number of jobs in New Zealand”. Of course.

Or not. More National ideology burned to the ground by facts.

Labour on fire at will

It was reported yesterday that “Labour would retain 90-day trial periods, but make them fairer”. Despite last minute claims to the contrary on Twitter, I think that this is probably correct.

Matthew Hooton is spinning like mad to talk up the economy. Unfortunately his spin sometimes bends the truth beyond breaking point, and there were three examples of that yesterday.

Thin end of the wedge to get thicker?

The Nats’ attacks on workers rights and conditions started with the “fire at will” (90 day probation) Bill. No surprise to find pressure from employers to double the duration.

Chart o’ the day: fire at will 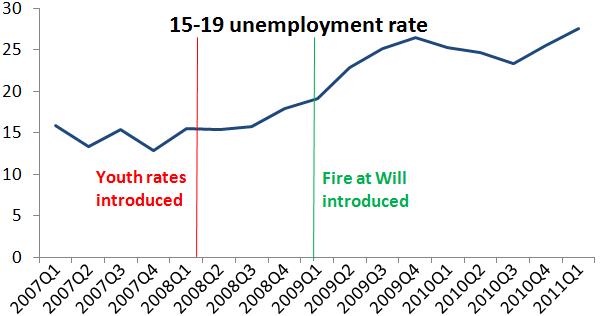 Fire at will was meant to help young people into work, wasn’t it?

Today National has a terrible April Fools for workers around Aotearoa: 90 day fire-at-will, reduced union access, sick notes after 1 day and minimum wage up a pittance. Workers are doing it tough already, and now National’s turning the screw.

The NZIER recently popped up with a study  purporting to show that the “90-day trial period” (the fire at will bill) is “working”.  The study and its conclusions have since been widely quoted.  Unfortunately the conclusions are a load of nonsense.  NZIER have committed the amateur hour mistake of seeing the cause that they want to see.

The CTU have launched the latest of their quirky and cute campaigns. Job Survivor Island illustrates the effects on real people of the boss being able to sack you without cause while you are denied legal redress. 1 in 5 workers are sacked under fire at will. Don’t become one of them, resist fire at […]

Fire at Will coming to your workplace

As of April 1 next year, I’m going to be a whole lot less confident moving to a new job. If I do, I’ll probably find the new contract gives the boss the right to fire me without giving me the right to justice if the firing is unfair. Reducing workers’ confidence to change jobs is just one of the stupid consequences of universal Fire at Will.

Fired for using too much sauce

The Nats are determined to push through more attacks on the rights of working New Zealanders. The latest stories of abuse of the Fire at Will law to emerge involve a chef who ‘who used too much sauce’ and a dairy worker who stood up for an abused immigrant worker. The Nats want all of us to be subject to Fire at Will. Our job is to fight back.

Heather Smith, the pharmacy worker who was sacked unfairly under the 90 day fire at will law and featured in a recent advert for the campaign has won a CTU-backed case against her employer in the Employment Court.

Workers are getting together to oppose the government’sÂ changes to employment law with rallies in the four main centres this weekend. Join your rally.
The Saturday rallies against National’s anti-work rights bill assemble at:
Auckland, QE2 Square, bottom of Queen St – 1pm
Wellington, Civic Square – 1pm
Christchurch, Catherdal Square – 1pm
and on Sunday:
Dunedin, Dental School, Great King St – 11am

John Key challenged the unions to “put up or shut up”. So they’re going to put up. The CTU has launched a campaign to name and shame businesses that are abusing the fire at will (90 day probation) bill. It’s a campaign based around personal stories. Heather Smith tells the first of many…

Unions are getting together to oppose the government’s changes to employment law with rallies in the Auckland, Wellington, Christchurch and Dunedin.

When National rammed through the first version of the 90 day fire at will law it claimed the period would be a ‘choice’ negotiated fairly between employees and employers.

Now employers are advertising it as a precondition in job ads, with the Minister backing them all the way.

During the election the National Party packaged up its policies so as not to scare voters. The 90 day probationary period was for two specific reasons. It was targeted toward people on the margins of the employment market and only applicable to small businesses. Either the original justifications still hold true, hence undermining any argument to extend the scheme, or the original justifications were rubbish from the very start.

National wants to make a change, they’ve got to make a powerful case that the change will have the results they claim. So where’s their evidence? Where are the models, the studies, the scenarios? They haven’t got any. This is faith-based government. Based on faith in the neo-liberal god. This is guess based government. The guess being that we’ll keep voting for that Nice Man Mr Key.

National’s promises aren’t worth the paper that they’re printed on. They’ve broken plenty and downgraded most of the rest to “aspirational goals”. Now John Key’s current anti-worker employment policies add a whole new chapter to the list of broken election promises.

The changing excuses for Fire at Will

In the 2008 election campaign, National carefully packaged up its policies in such a manner as not to scare voters. One of the policies John Key was very careful to frame was the 90 day probationary period for new workers, rightly called Fire at Will. This removal of rights for working people, he explained to us, was for two specific reasons. It was targeted toward people on the margins of the employment market and only applicable to small businesses (less than 20 workers).

Good to see John Key’s lies over the 90 day fire at will law are starting to catch up with him. An employment specialist has come out contradicting Key’s smug assurances that even though his fire at will law will explicitly remove our right to even be given a reason why we’re getting the sack, somehow good faith provisions would still require the employer the give one.

Does John Key have any evidence or official advice to back up his claim that taking away workers’ rights to basic fairness and natural justice promotes growth? Will Kiwi workers be as a result of taking away our job security and bargaining power?

It’s different when it’s your job

It was mainly young and poor workers on the minimum wage who were its victims of Fire at Will before. But now the middle class’s jobs will be on the knife edge too and they’re not happy. This will be an issue that causes National to bleed votes, especially if Labour and the unions organise a strong campaign. Middle NZ doesn’t care about poor workers but it’s different when it’s your job at risk.

Fire at Will: abuses, no new jobs

The Key Government decided not to monitor the implementation of its Fire at Will law. It probably feared embarrassment. Fortunately, the EMA and CTU have done something to fill the gap (from RNZ report, not yet online). The EMA conducted a survey of members and the CTU has asked workers to come to them for assistance if […]

The Fire at Will law has been in place for two months. It’s still very early days but how is it going? Are workers being forced into 90-Day periods against their will? Are people being fired for no good reason? The government can’t tell us because it isn’t bothering to monitor its implementation and effects. No […]

No Right Turn exposes ineffectual government spin on the fire at will act. The select committee procedure would have improved the bill. Perhaps to the point that it at least lived up to the spin. Earlier in the month, Minister of Labour Kate Wilkinson warned employers not to abuse their new 90-day fire at will […]

Fire at will causing discrimination already

The Herald reports the fire at will law is already claiming victims, after Sue Bradford revealed a beneficiary has been denied help for his job relocation costs because Work and Income considered his 90 day ‘trial’ period to mean he was a temporary rather than a permanent worker. Work and Income said it had concerns […]

Kate Wilkinson’s attempts to defend the fire at will bill are getting increasingly desperate. She’s just put out an excited press release where she’s trying to claim that a CTU flyer telling workers they don’t legally have to sign onto a 90 day ‘trial’ period proves her absurd claim that these periods are therefore ‘voluntary’. […]

The Fire at Will campaign

It’s good to see the Council of Trade Unions offering solidarity to non-union workers who are subject to National’s fire at will law by providing free legal and industrial support. As Helen Kelly said on the news last night, when the Government fails in its basic duty to protect workers from arbitrary employer power then […]

Via Farrar’s site I’ve come across this a lovely piece of Government spin. It’s a PDF document checking off everything National’s done in its first 100 days. It’s pretty comprehensive. Funny thing is, despite mentioning everything from bonding doctors to line by line spending reviews, they seem to have completely forgotten the unpopular 90 day […]

No ReStart for Fire at Will even if unfair

So much for all National’s fine words about probation periods and job creation. Today’s Dominion reports that ReStart will not be available for “those who were sacked, including those who lost their jobs under the new 90-day probation law.” So the conditions for three months “probation” are that you cannot ask for reasons for dismissal […]