Forgetting what the game is for

Most politicians, in my opinion, have forgotten what politics is for. They treat it as a game to be won at all costs, never mind the impact on real lives in the real world. It is the kind of mindset exhibited by National at all levels. Disturbingly, most media buys in to this too. It is the kind of mindset exhibited by those who pronounced John Key the politician of the year 2014 because there was no end the lies he was prepared to tell, or those who arrange “awards” for the most vile blogger in the country. It’s all about smashing peoples’ faces into the ground, innit.

And so of course The Herald’s coverage of yesterday’s speeches (click the image for a larger version): 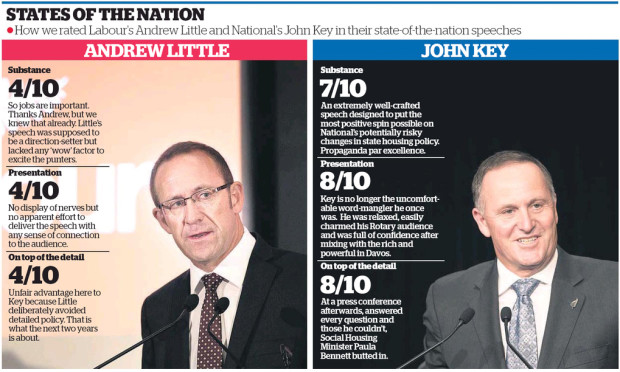 It’s all about supporting their man Key. Under Substance is listed “the most positive spin” and “propaganda par excellence”. Since when were spin and propaganda the same as substance? Under Presentation we are reminded of Key’s rich mates. Under Detail we are told that Key answered every question except those he couldn’t. It’s all a game and Key wins!!!

Fortunately it isn’t all nonsense. Someone thought to go and ask some real people what they think:

Reaction to John Key’s state housing policy: ‘He’s forgotten where he came from’

Prime Minister John Key grew up in a state house on Hollyford Ave in Bryndwr, in west Christchurch. Yesterday, many residents … were disappointed at the new housing plans. The man who answered the door at Mr Key’s old home, 19 Hollyford Ave, was evidently not a fan of Mr Key, and declined to comment.

Shelley Anderson, a 44-year-old mother and assistant manager at a bar/restaurant, is waiting for Housing New Zealand to carry out earthquake repairs to her Hollyford Ave house, more than four years after the shaking started. She said Mr Key had “forgotten where he’s come from”.

A few doors down, Jo Davies, a 26-year-old nanny, said state houses should remain under government control. “If you’re on a benefit, you can’t afford the rents. It’s hard enough if you are working,” she said. “You think he’d be a bit more on to the struggle that people are having just to pay their bills.”

New Zealand would be better served by more reporting like that second piece, on real issues and the impact on real lives. Instead the headlines are dominated by the political game and the opportunity to support a preferred team. Too much media has forgotten what the game is for.

19 comments on “Forgetting what the game is for ”