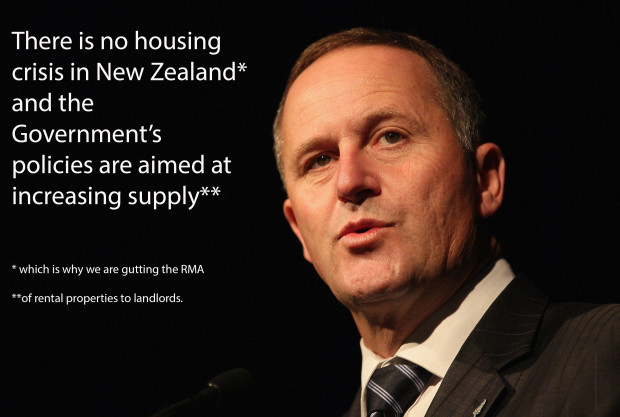 And in the second leg of the state of the nation double John Key has delivered his speech on housing policy.  You can tell that the focus groups are screaming about housing affordability especially in Auckland.  National knows this is a significant issue and it has to create the illusion that it is doing something.

Twelve months ago I witnessed the media onslaught on Labour’s Best Start policy.  Some slightly sloppy language led to a media condemnation of the policy because the claimed benefits may not have been quite as good as intended.  There was a significant amount of background material but a few imperfections caused a massive response.  Some would say it was an over response.

I hope the media subject National’s announcement to the same scrutiny.  Because the details look shoddy.  And this is not new policy, the framework has been put in place over the past couple of years and this is just advancement and development of National’s big housing sell off using assistance to charity to make the policy slightly more palatable.

I had a look for background material for National’s announcement.  I found John Key’s speech.  I found some really basic numbers about social housing.  I found this Social Housing website and references to the Community Housing Regulatory Authority.  And I learned that a Community Housing Provider is a housing provider that applies for registration and has as one of its goals the provision of either social rental housing or affordable rental housing or both.  The other goals could be anything.  It does not seem to be difficult to become a Community House Provider and becoming the potential purchaser of state houses sold cheaply.

Some more detail has subsequently been released.  On morning report this morning legendary ladder destroyer Paula Bennett was interviewed by Guyon Espiner.  All credit to Guyon for asking tough questions that Bennett struggled to answer.

The biggest question for me is why does the Government think that private charitable entities are better placed to provide state housing than the Government?  New Zealand is full of good quality state houses which have provided stability and a home for Kiwi families for generations.  There are still myriads of state houses constructed in the 1940s and 1950s throughout the country.

The talk this morning on the radio is all about “capacity building”.  The community housing sector is obviously keen on the policy and is dedicated.  But the problem is massive.  And the state has a historic role in providing reasonable quality accommodation for many New Zealanders, needs no capacity building, and can just get on with the job.

This policy is badly targeted, it may result in reduced state provision for housing at a time of intense need, all it may do is increase rental inflation and it will not necessarily result in one new house being constructed.

The Labour Party and Phil Twyford have a petition opposing the sale of state houses.  If you have not already done so sign up.