Key out of touch on taxes

Do you feel better off after the great tax swindle? If you do you’re one of the few lucky ones. Key’s tax cut favoured the rich, and he broke his promise to raise GST for everyone. Net result — bugger all — unless you’re a high income earner. For most people any supposed gains disappeared into inflation, and those with kids are about to get whacked with big increases in childcare costs as well.

So most of us don’t feel any better off, and a couple of recent surveys have picked this up. In November:

A nationwide HorizonPoll survey of 1558 people between November 16 and 19 found 8.2 percent of those surveyed felt better off because of the changes while 53.5 percent thought they were worse off. A substantial group, 35.6 percent, felt their situation was unchanged.

The PM is puzzled at our ingratitude:

“I’m a little surprised, actually,” Mr Key said at his post-cabinet press conference today. “The moves we’ve made have had quite an impact on the pay packets of most New Zealanders.”

Can everyone see Key’s problem? He’s operating under a bit of a misconception. The tax swindle hasn’t had “quite an impact on the pay packets of most New Zealanders” at all. It’s had negligible impact. The following graph (stolen from better researchers than I here and here) tells the story: 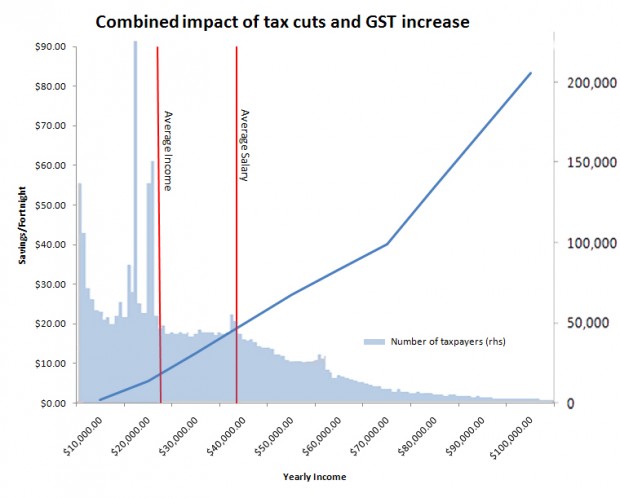 Folk on the average income or average wage got less than ten dollars a week (twenty a fortnight on the left Y axis). A paltry sum soon eaten up by inflation and increased costs. Its not until $80,000 PA and above that the gains reach even twenty a week. But the real problem for Key is that a vanishingly small proportion of the population have that kind of income (see distribution in the background and right Y axis).

So it’s pretty simple really. Most of us don’t feel better off because most of us aren’t better off. The only surprise is that John Key is so completely out of touch as to fail to understand this.