It’s been confirmed that Matt McCarten, currently Labour’s Chief of Staff, will move back to Auckland in September to head up a new project there. Matt will be in charge of maximising the vote in NZ’s biggest city and will run an office dedicated to that task.

It’s a tribute to his skills that he was retained in the Chief of Staff role by Andrew Little after being appointed by David Cunliffe. Little notes that McCarten’s value is in coordination:

“His strength is in the networks and setting up programmes and places for me to go to and getting stuff organised. And that is what I need.”

Matt has an almost unique ability to add value to whatever political project he takes on.

In his time he directly challenged the Rogernomes in Labour, helping to form NewLabour with Jim Anderton. He then oversaw the formation of the Alliance, the political grouping that spectacularly took a big chunk of the left vote in the 1999 election.

After the Alliance fell apart, he advised Tariana Turia and other disaffected MP’s who had broken away from Labour. While he was no doubt disappointed that the Maori party rejected his preferred left positioning in favour of a non challenging spot as National’s lapdog, his ability to organise was recognised shortly afterwards when he returned to the union movement as National Secretary of the Unite union.

After leaving Unite and a brief time advising Hone Harawira’s fledgling mana party, McCarten surprised many on the left by accepting the Labour Party’s Chief of Staff role, at the invitation of David Cunliffe. In his time in charge of the Opposition leaders team, he has overseen a refreshing of the ranks, and he leaves behind a solid core of staffers who appear ready for election year.

McCarten’s next challenge will be to solidify the work Labour are doing north of the Bombay’s. It’s been obvious for quite some time that National are vulnerable in Auckland.

National’s mishandling of the housing crisis, their lukewarm commitment to public transport and their failure to get a unity candidate for the mayoral election shows a party that has dropped the ball in NZ’s biggest city.

Opening a dedicated office in Auckland is a sign of Labour’s growing confidence and strategic nous. And Matt McCarten is the ideal person to maximise the outcomes, so I’m expecting good things from this appointment.

Yet again, we are seeing the Labour party making organisational gains under the leadership of Andrew Little. The parliamentary caucus is united and most of the tainted old guard MP’s are going or gone. Party membership is on the improve, the activist base is growing and the MoU with the Greens has given some solidity to the opposition not seen in recent years.

If Labour can take Auckland, they’ll be forming the next government. 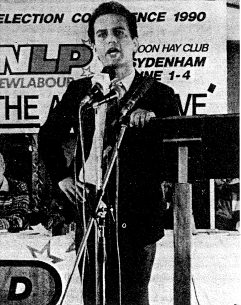