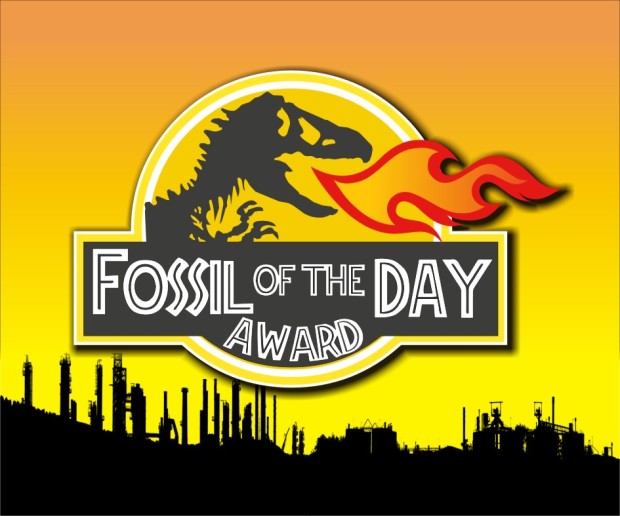 The Climate Action Network has awarded New Zealand a second Fossil of the Day, this time in recognition of New Zealand’s role in blocking compensation for vulnerable countries for climate change damage in the draft text for the Paris Agreement.

Zoe Lenzie-Smith a member of the New Zealand Youth Delegation describes what happened:

“New Zealand, Australia and the US have made a joint effort to block the loss and damage clause in the text. That means that vulnerable countries, especially people from Pacific Islands, will have a very difficult time to get any compensation when there are damages related to climate change.”

In response, youth and environmental groups organised a sit-in in the area where the plenary sessions are held, to demonstrate “that we will not stand by and watch these decisions being made without any input or influence from civil society”.

Minister Groser’s lacklustre climate leadership was also recognized with a dishonourable mention at the event. Fossil of the Day is an award given by Climate Action Network International, a global coalition of environmental NGOs.

We are heartbroken that New Zealand has won a second Fossil of the Day award by trying to leave vulnerable communities out at sea. Instead we should be future proofing the Pacific by increasing our inadequate Green Climate Fund contribution and doing all we can to make sure that our neighbours, among others, get their fair share for the damages resulting from climate change. Friends don’t let friends drown without offering a helping hand and New Zealand can and should do better. ”

The talks are entering their last few days and hopes of an agreement are high although it is almost inevitable that the agreement will not be sufficient to achieve even the inadequate goal of stopping a 2 degree increase which will mean that the world’s environment is fundamentally changed.

But judging from how main stream media is treating the matter you would think that it was just business as usual.  If you want to follow what is happening do not rely on our main stream media, apart from Radio New Zealand.  The printed media’s coverage of the conference is sparse and inadequate.

But social media is standing out.  Julie Anne Genter is providing regular updates.  Here is her latest:

And the New Zealand Youth Delegation is active both on twitter and on their site.