National is failing to resolve the lack of jobs as they provide a 14-year high in unemployment – even after exporting 180,000 Kiwis to Australia. If we add them in the unemployment rate doubles to 13.8%. More than 40,000 of those job losses have been in manufacturing.  Research says that manufacturing jobs have a multiplier of 2.9, that means about 80,000 other indirect job losses.  Combined that’s 2/3rds of our unemployment rate, just by getting back to where we were when National took office.

Granny says – you can’t do that

The ever forward looking and even-handed Herald devotes its editorial to attacking Labour for supporting Winston Peters’ Bill to make some small changes to the Reserve Banks’ objectives to bring them more in line with Australia’s. Leaving aside the fact that the Herald hasn’t attacked NZF or the 3 other parties who support this, only Labour, isn’t it time Granny got with the programme?

John Key likes to trade on his experience as a, well, trader. You know, he’s the deal maker. The one to steer us through tough economic times, to get our exports growing. He understands the markets and that knowledge will benefit New Zealand. But, how well has he really done? Let’s start this series close to home for Key: the exchange rate.

Hickey’s prescription for the currency

The neoliberal myth is that government economic policy doesn’t really matter, it can’t affect the economy – apart from being an anchor on growth. The truth is, government is the biggest actor in our economy. What it does matters. Bernard Hickey has listed 10 ways that the government could act to get the exchange rate down.

Every US dollar we make in exports is worth 17% less in New Zealand than 4 months ago. Gonna get worse. How long’s this sustainable? 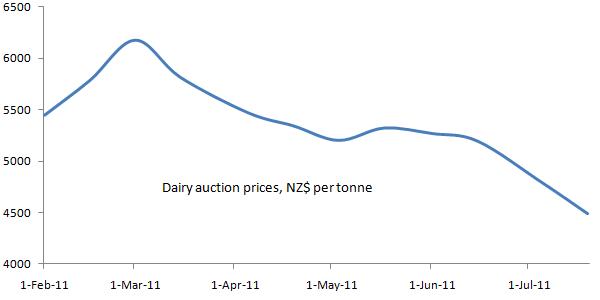 The US Government has begun creating new money out of thin air, to inflate away the value of its debt and lower its currency to make its industries more competitive. It’s not the only country. Nearly all the major currencies are engaged in the ‘Currency Wars’, trying to force down their exchanger rates. We’re in the cross-fire doing nothing.

Exchange rates, Kiwisaver, breaking promises, & the art of doing nothing

A range of interesting political/economic comment today in the Herald: Fran O’Sullivan joins the left-wing and groups like Federated Farmers in calling on the Key Government to sort out monetary policy. At the moment, the Reserve Bank is tasked solely with controlling inflation with interest rates as its only real tool, while the exchange is […]