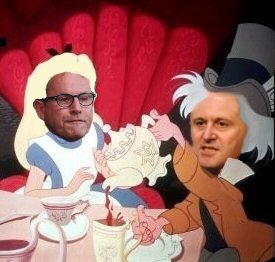 The Herald this morning reported on how the police obtained a search warrant to seize Teapot taper Bradley Ambrose’s text messages.  Law Professor Bill Hodge described the obtaining the warrant as mind boggling.

Why in hell would they have those, for what investigatory purpose?

The police do have the capacity to get a warrant. I wouldn’t have thought this was a case that required text messages.

I think the police access to communications is too freely given and not sufficiently monitored … [i]t’s time we reviewed this important issue of privacy as a community. We need to determine what is appropriate and how it is protected.

I would steadfastly fight to maintain my clients’ ability to communicate with me without fear of those communications being intercepted or obtained by the police. Clients have to be able to communicate freely and frankly.

How a warrant to seize texts belonging to a reporter including texts to and from his lawyer could be issued needs to be investigated because it is wrong at many levels.  Freedom of the press means that warrants should only be granted in the most extreme of situations for instance where human life is at stake, not where the Prime Minister is going to be politically embarassed.  Legal professional privilege was trashed.  This is a good lesson for lawyers that they should ensure that texts are innocuous in the extreme.  And you have to wonder about what prosecutorial benefit the texts would provide.

The episode jars with Andrea Vance’s and Peter Dunne’s treatment.  Faced with two similar situation Key acted in completely opposite ways.  Where it was his privacy being arguably breached he used the forces of the state to hound the person who had, innocently in my view, intercepted the information.  But where he faced political embarassment by leaks he chose to trash the rights of privacy of others in an attempt to find the leaker.

If the GCSB bill is passed the security forces will be able to pretty well as a matter of course engage in the sort of behaviour that Ambrose was alleged to have engaged in.

44 comments on “The teapot tapes and Andrea Vance’s emails ”