John Key and an array of National sock puppets have misrepresented Labour’s UBI proposal as party policy and as being very expensive when it is not party policy and when a variety of different potential forms have been raised for discussion.

Why are we paying Key’s legal expenses for him?

Key backed down on using taxpayer money for his payout to Ambrose – but he is still using it to cover his legal expenses in the case. Why?

John Key’s office has announced that he will now pay the agreed damages from private sources.

The teapot payout shows that, while Key is keen on distinguishing between his various hats when he’s trying to dodge responsibility, he is just as keen on ignoring the differences if it lets him dip into public money.

Key has made a payout in the Bradley Ambrose defamation case over the “teapot tapes”.

Teapot tape cameraman Bradley Ambrose plans to take a defamation case against John Key. A crowdfunding campaign has been set up to help him raise the $38,000 required. 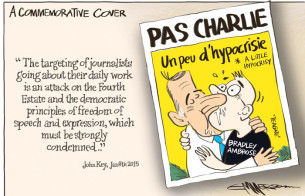 Key is carrying plenty of baggage now. Haunted not only by dirty politics, but also the scandal of the election before, the teapot tapes.

The Herald reported this morning that the police had previously obtained a warrant to seize Bradley Ambrose text messages.  It seems that in New Zealand a journalist’s rights of privacy do not count for much.  And John Key’s actions to protect his privacy using extreme measures but more recently in trashing Andrea Vance’s privacy again with extreme measures are jarring.

His policies (such that they are) aren’t working, his government is now being questioned, his economy is stuck in the doldrums, so naturally Key is looking for someone to blame. The media!

The fateful tea party – a footnote

So much of what shapes the current political landscape traces its roots back to the fateful tea party. But at the personal level, there was some welcome news for cameraman Bradley Ambrose recently.

No charge for “teapot” cameraman

In breaking news 3News reports that there will be no charge against “teapot” cameraman Bradley Ambrose.

According to reporter Derek Cheng (#dchengnzh) inside the courtroom “Judge reserved decision til 215 tomoro #votenz #ambrose“.

Ambrose to sue Key for defamation

Bradley Ambrose, the cameraman widely maligned by John Key and his pudgey lapdogs David Farrar and Cameron Slater for daring to hold the PM to some basic standards of accountability, is demanding an apology from John Key or he’ll take the PM to court for defamation.

UPDATE: The final week of the campaign will kick off with a police raid on the Herald Monday morning.