Best yet in National Party splatter series in production

The kicker in Andrea Vance’s Blue Blood, her insider’s view of the splatter-movie that has been the National Party since John Key stepped down, is that the best yet is in production. She chronicles treachery that has become the modus operandi of the vacuous vipers inhabiting the caucus. Details of the dirty work induce you to turn the page for more. It doesn’t look like Luxon is the redeemer.

I’ve just been reading Andrea Vance’s review of Judith Collin’s released biography. One thing that usually infuriates me is whining arseholes. I have always thought Judith Collins has always been one of them. Vindictive, small-minded, and ignorant. She whines even through a review that merely quotes her.

An unfortunate rush to judgment by the media?

A release of information from Labour Council member Simon Mitchell has raised issues about what members of the Labour Party knew about recent sexual abuse allegations and when.

National’s varied response to the Thompson and Clark report

Simon Bridges and Gerry Brownlee have offered diametrically opposed versions of how to respond to the crisis presented by the report into Thompson and Clark’s activities.

Andrea Vance has attacked Labour’s Ready to Work policy and claimed that the policy does not add up, despite being told how the figures had been arrived at.

It appears that Parliamentary Services is monitoring MPs emails.  And not just for things such as spam and viruses.

Contrary to Prime Minister John Key’s categorical assertion, his “lawyer”, Ken Whitney, has been found to have links to Mossack Fonseca, the Panama law firm at the centre of a global scandal on tax evasion and avoidance, TVNZ reported today.

Great to see two much needed voices back on line, Dita de Boni now writing for TVNZ, and John Campbell doing what he does best for RNZ. (Update with Andrea Vance’s more to TVNZ).

Andrea Vance on the Labour leader’s first 100 days in office.

Andrew Little will give his state of the nation speech on 28 January. What can we expect to see in it?

On the eve of Christmas in a cynical attempt to avoid political damage the Government has apologised to Andrea Vance for breaching her rights of privacy in 2013 after requiring Parliamentary Services to hand over her metadata and attempting to cover up the exercise. 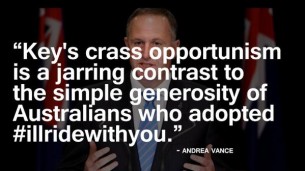 There are two approaches to being a star of dirty politics and not wanting to answer questions about it. Both were displayed on Campbell Live last night by Jason Ede and Cameron Slater. And Andrea Vance has details on taxpayers paying for Slaters legal bills.

Key will apologise to Slater but not Billingsley or Vance

John Key has apologised to Cameron Slater for releasing an email which details a campaign against a senior Public Servant.

An excellent piece by Andrea Vance in the weekend, on Key’s terrorism dog and pony show.

NZ Media has got the message, leading with coverage of the Greenwald / Snowden evidence of mass surveillance of New Zealanders, and the surprise revelation of two US “spy bases” in NZ. Best coverage by Andrea Vance. Updated with a link to video of last night’s event.

Andrea Vance has a weird attack piece on Cunliffe where she accuses him of not being hungry, not being able to offer instant affordable houses to everybody, not standing in the right place, and even sleeping.

Careering to the right

“Dirty Politics” and “The Hollow Men” have revealed the extent of the National party’s nasty internal war over the past decade. Cameron Slater is merely one of the noisier but dumber sock puppet weapons in use against National’s centre and moderates. Looking at the actions of Simon Lusk using his sock puppet is more revealing…

Grant Robertson & David Cunliffe explain how the GCSB Bill is bad law (especially section 8 & related sections). It doesn’t provide adequate oversight or safeguards against the wholesale spying on New Zealanders. A clarifying statement from the PM is not good law. Andrea Vance demystifies the Bill.

GCSB Bill to be debated today

The Herald reported this morning that the police had previously obtained a warrant to seize Bradley Ambrose text messages.  It seems that in New Zealand a journalist’s rights of privacy do not count for much.  And John Key’s actions to protect his privacy using extreme measures but more recently in trashing Andrea Vance’s privacy again with extreme measures are jarring.

In the latest episode of Kim Dotcom inspired craziness it appears that Parliamentary Services collated and sent Peter Dunne’s emails to David Henry clearly without Dunne’s permission.  Dunne and Andrea Vance are understandably apopletic about this.  Because this sort of stuff only happens in banana republics …

The government has tried a good old fashioned Friday Document Dump, releasing the email correspondence relating to Henry Inquiry. More incompetence and or lies are revealed, and Peter Dunne is pissed. No doubt we can expect the same levels of honesty and competence when the Key-Dunne spying bill extends the potential for spying to us all.

Presumably there is some tiny but “real” risk of terrorist action in NZ. But it doesn’t justify the broad powers of the Key-Dunne spying Bill. Recent experience and the government’s own protocols show that these spying powers will be used on activists and journalists that the government of the day doesn’t like. The 88 who have been illegally spied on already call bullshit.

How did Peters know that Dunne was gone?

Winston Peters knew before the Vance telephone use report was prepared that Peter Dunne was the leaker of the Kitteridge report.  Either John Key has not disclosed all the information about the collection of Ministerial telephone records or Peters has a source within Parliamentary Services.

Here’s today’s required reading (so far) in the ongoing spy scandals that are swirling around John Key and his fiasco of a government. Hey Peter Dunne, are you really going to vote for more GCSB spying? Really?

Waking up the fourth estate

Is this what it takes to wake up the fourth estate so they truly fulfill their role to speak truth to power?  Andrea Vance is mad as hell about the “hacking” of her phone records.  Press freedom and all our democratic rights are in danger.  Stop the GCSB Bill!