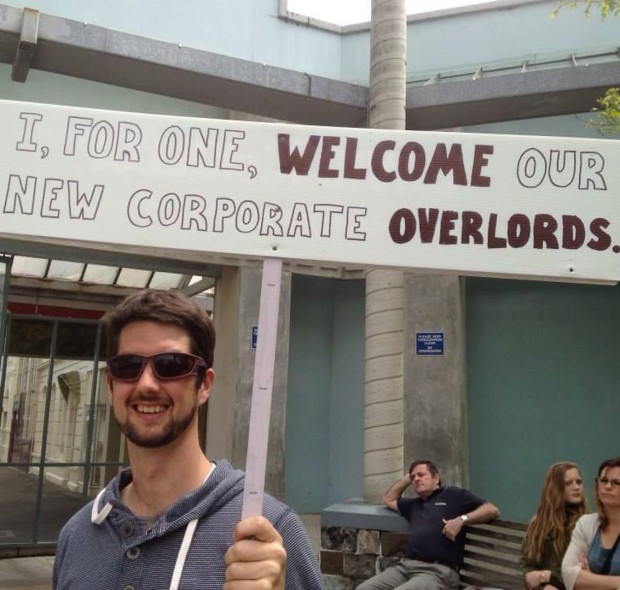 New Zealand has one of the most concentrated and oligopolistic economies in the world, and also one of the least commercially protected societies. Will we ever be able to break out of it?

If you look across our society, it is the relationships of less than 20 main companies with our government that form a dominant nexus of power. This isn’t a new observation, with Bruce Jesson commenting on it throughout the 1980s.

Check out the top 2 or at best 3 companies in all of these fields: banking, supermarkets, fishing, dairy, meat, apples pears and kiwifruit, ports and airports, building materials, water, electricity generators: many of their controlling organisations were formed by legislation and get regularly reviewed. Some have public majority ownership. Some have stronger regulation than others. Few are ever held to account. Even fewer answer squarely to their customers. Their power over us is near-total. Even North and South magazine did a recent cover feature: “The Real Reason New Zealand Is So Expensive”.

What we are feeling across all these industries is a system of interdependence between the state and corporations that is very, very hard to disentangle.

It’s part of a system of liberal trade that the United States began over 75 years ago to help integrate the world around a vision of peaceful economic cooperation, and evolved as we shifted from a British corporation dominated postcolonial economy to an over-managed one and now to a very odd hybrid.

But many of the vital international systems that used to hold this together are failing.

Nothing has underscored this breakdown in the ‘system’ more than COVID19, with nations now fighting over how to secure vaccines. New Zealand’s much-vaunted national drug buyer Pharmac has to get in the queue like everyone else: so much for monopsonistic power when it counted. We are also seeing real tensions in the production of semiconductors worldwide. United States-formed corporates like Facebook and Google are continuing to stave off multilateral regulation at all. Not even climate change can unify our world.

Small signs of multilateral hope like a global corporate tax floor remain few and far between.

One result of these problems has been a surge in calls for governments across the world to introduce protectionist measures, closely manage domestic industries, and pursue new visions of autarky. But these clashes and government officials’ responses to them threaten far more than the world’s fragile international industrial and financial systems. They have led citizens to start to lose faith in the rule of law and in the intentions of longtime state allies. Worse, they have played a role in the disruption of democratic debates and norms in the United States and Europe.

It is going to take a very different set of relationships between China, the United States and Europe to unwind some of the dangers. That’s unlikely. Nor are there useful international models for us to track against.

New Zealand itself is in the worst of all worlds: neither fully privatised enough to have hefty regulators with a big sticks that take some of the impact of political reputation when things really go wrong, nor having corporates integrated enough with policy to get much public good done.

And as long as our own semi-public and semi-private corporates can keep this balance-of-no-power up, the easier it will be for their balance sheets, for their stock options and retirements, and for our collective slide into the same low-productivity economy and low ambition society that we now have. That’s the balance of power right now.

Worse, I don’t see any answers from either our major market players or from government that might build something anew.