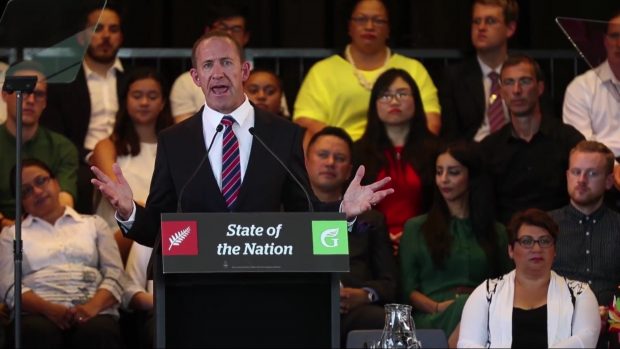 Everyone’s had their own go at how Labour and the Greens can take back power, even with most of the economic, social, and political indicators going the governments’ way.

There’s no education in the second kick of a bull. Or indeed the fourth kick, which by about 50-50 is where we are headed in 2017. Losing four terms in a row would suck. it would alter the landscape, in ways that the left would find hard to recover from for many, many years. And winning will not be determined on whether we are “more left” or “more centre”.

To paraphrase Politico for four straight election cycles, Labour has ignored research from the fields of cognitive linguistics and psychology that the most effective way to communicate with other humans is by telling emotional stories. Instead, we have focussed on policy content and the cumbersome, awkward and broken relationship between what policies parties have and their attractiveness to the population.

None of that stands against many on the left of Labour and the Greens who consistently assert that there’s no point being in power if you trash the coalitions who have held you up – even at your lowest point. That’s true, but it’s not how you win.

After this many losses we are inclined to go with the optimum scientifically polled recipe. The problem is that science, by definition, requires controlling for a few variables in a way that can be replicated by others, allowing over time for findings to be validated and a consensus to emerge. Quantitative political science is an oxymoron. Donald Trump beat Hillary Clinton, and John Key beat Helen Clark, because they told their story better.

He’s right. We don’t have to worry about whether one kind of politics has more facts in it than the other. We are in the world of where politics always should be: the stuff that dreams are made of.

Again from Politico “Storytelling has been the most effective form of communication throughout the entirety of human history. And that is unlikely to change, given that the experts in neurophysiology affirm that the neural pathway for stories is central to the way the human brain functions. The human mind is a story processor, not a logic processor, as social psychologist Jonathan Haidt has written.”

“Make America Great Again”. Say that out loud, and try not to think of an elephant. Greatness revolves as its own sun.  The political brain is an emotional brain. It wants to see how you feel, and how your feelings relate to our own feelings. You do that by telling a story. These things called stories are a kind of rhetoric designed to make you feel, by taking your mind from one place to another. You get from where you are, to greatness, with “Make America Great Again.” Those four words are the story you project onto the candidate.

That story of greatness regained is the tree.  Issues are to a campaign what ornaments are to a Christmas tree.

As Emory University psychologist Westen said in “The Political Brain”: “You can slog it out for those few millimetres of cerebral turf that process facts, figures, and policy statements. Or you can take your campaign to the broader neural electorate collecting delegates throughout the brain and targeting different emotional states with messages designed to maximise their appeal.”

How can we get them to think differently about healthcare? Tell them about your own fight with cancer, and how the health system helped or hindered. Little got that right. He just needs to keep going: more emotional truth, more votes.

Good politicians that last the test of multiple elections, well, that’s a recipe known only to the political version of Colonel Sanders. You’re inclined to lick your fingers and come back for seconds. Don’t ask me for miracles other than retrospectively.

There’s one small thing I remember out of Andrew Little’s last speech: he had cancer. Oh wait one other thing: he has a 16-year-old son who plays Rugby. There was of course no new policy announced. There were very few abstract nouns about the the hope, the peace, the truth, the money, the love, the country, the hate, the vibe, or anything else like that in evidence. Just a good person dealing with life. A human being who was also a leader. Shorn of glasses, or tie, that’s what we got. Human.

Here’s how Labour and the Greens can actually win an election together. It’s a local story. Labour and the Greens totally swept the board in the Auckland Council’s Waitakere Ranges Local Board in 2013 and 2017. It’s a strange constituency on paper. Much of it is wealthy, decile 1 or 2. True Blue on paper. It is a highly networked environment, but also really low in public transport use. It has very few non-European types, if the western New Lynn and Helensville parliamentary demographic meshblock surveys are to be believed. And yet, National at a local level gets totally creamed, and the Labour-Green coalition win like they never have centrally.

The basic reason is there is a well networked group of activists, some Labour, some Green and some who refuse to join any political party, who have worked for years on achieving and maintaining protection for the Waitakere Ranges.  The Waitakere Ranges Heritage Area Act is a result of this activism.  Strong progressive networks have been formed and candidates who talk about this desire to provide meaningful protection and who are part of these networks are given a head start.

It’s a quiet success story that’s pushed over into the Henderson and Whau wards as well. Total Labour and Green lock. Anyone heard of that story? No? But it’s locked in long term. So there’s political lessons to be learned there for anyone attempting to have a go at altering the entire government. Nothing to do with data analytics, or how-deep-left-you-are politics, and all to do with relationships and values. It’s subtle, and the right have simply no answer. It’s overcome National booth dominance in constituency elections for decades.

Labour’s success in Mt Roskill and in Mt Albert, and New Zealand First’s win in Northland, are further examples of the appropriate approach to campaigns. They are won by outstanding characters, characters whose personalities resonate with strength, with appropriate charisma, and with their own story.

That’s why like Dave Gold I believe we would be better served if we paid less attention to quantitative political science or by how centrist or left you are and instead by promoting the kind of product we have to sell: outstanding politicians who are good at their job and campaigns based on values. Those people are beings who inspire with the art of storytelling, real emotionally true storytelling, with their own lives that communicate their own narrative construction and message framing. That makes them human, and that makes them true.

Here in New Zealand we don’t have the great kick-in-the-behind of a Donald Trump or a Steve Bannon. We don’t really have an alt-right to rally the old troops against, as they are now doing in the United States.  We simply have a stable society, led by a consistently mediocre government, who have never had a plan other than to react to events. We are a movement, grown slowly weaker, as Judy Dench (in Bond) quotes from Tennyson:

We are not now that strength which in old days
Moved earth and heaven; that which we are, we are;
One equal temper of heroic hearts,
Made weak by time and fate, but strong in will
To strive, to seek, to find, and not to yield.

Labour and the Greens face about the same chance of changing New Zealand’s government this time as they did in 2014. Reframing their political dialogue and practise, rather than ideologically veering one way other the other, will give them a better chance of achieving government once more.