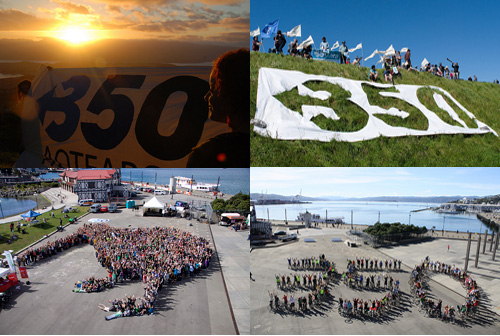 Scientists say that 350 parts per million CO2 in the atmosphere is the safe limit for humanity. We’re above that limit and we’re climbing fast. 350 Aotearoa is the New Zealand arm of 350.org, an international campaign dedicated to creating an equitable global climate treaty that lowers carbon dioxide below 350 parts per million.

Last Saturday (24 October) was a global Day of Action, the “Most widespread day of political action in history”.  There were 5,248 events in 181 countries, 110 of them in New Zealand alone. Tens, possibly hundreds of thousands of people took part. Check out some of the images from the NZ events here.

Internationally the media coverage wasn’t bad. It made the front page of the New York Times, made the Washington Post, news sites, and so on.

Here the coverage had some notable gaps. There was a piece in the Dominion Post, a piece in the Otago Daily Times. Radio NZ and TV3 covered it. But I can’t find anything (maybe something I missed, I don’t think there was anything prominent!) in The Herald, on TV1, or many of the newspapers.

So those media outlets that didn’t cover it – what’s up folks? They made it easy for you, here’s the press kit. This was a major international event to highlight the greatest global threat faced by humanity, and it wasn’t important enough to cover? Didn’t warrant a brief interruption to the usual diet of celebrity gossip and shock horror crime stories? You people have a platform, you can reach the public, why not use it for good purposes sometimes? Sigh, I know, I know, silly old fashioned r0b. Most of the media exists not to inform, but to sell advertising. It’s just – the cost of our ignorance is going to be high…