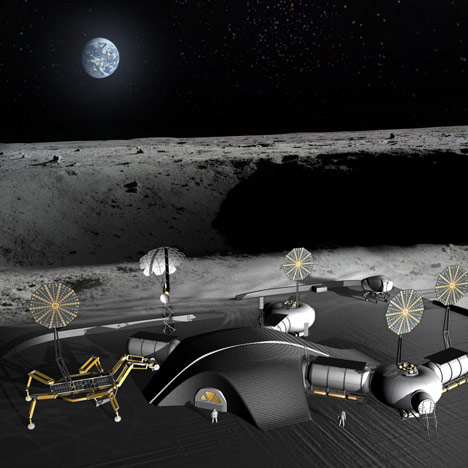 Heard of this one a few weeks ago:

Tomas Rousek, Katarina Eriksson and Dr. Ondrej Doule are collaborating with NASA’s Jet Propulsion Laboratory on plans for a modular architectural structure at the lunar south pole. Each module would be printed using a NASA robotic system, which would produce a ceramic-like material by microwave-sintering lunar soil, also known as regolith. There would be no need for glue, as the particles would naturally bond themselves together when heated to the right temperature by the robots.

A three-dimensional (3D) printer powered by sunlight has been developed with the aim of turning desert sand into glass. Now, experts are recognising the device as a promising first step towards a future large-scale industry.

It seems that 3D Printing is really starting to mature. Such printers are becoming smaller, cheaper and more capable. The first article I linked to shows that it’s only a matter of time before builders become obsolete. Both articles show that a lot can be done with the diffuse energy of the sun.

Although it has a ways to go 3D printing is, IMO, the next level in manufacturing. It produces less waste than traditional forms and is far more flexible. Parts could be made on site from local raw resources rather than being mass produced in a dedicated factory based on the old manufacturing model and then being shipped around the world. There is some doubt that 3D printing capability of reaching the same speed that traditional manufacturing can but I believe that will be addressed in time.

The first major effect of 3D printing though will be the fact that even small communities will be able to afford 3D manufacturing facilities. As I said, they’re small and cheap compared to traditional factories which means that trade will become less and less of an option – especially international trade. No more exporting ourselves to wealth (not that that was ever going to work).

The neo-liberals will get the perfect competition that they’ve dreamed of and it will be their nightmare. When everyone can manufacture whatever they need and designs can easily be shared across the internet then the artificial restrictions (Think patents and copyright) that the capitalists have been building up for the last few centuries will break. Profits will crash, jobs will disappear and poverty will be rampant. At that point we will have to make a choice – to work together or to try to keep capitalism going and the latter isn’t an option.