A bunch of clowns 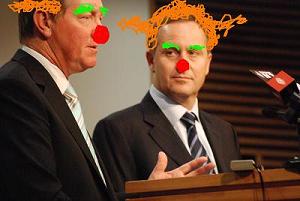 Poor old Nick Smith. Not only is he stuck peddling long-disproved lies about ACC but now it seems he can’t even get a simple procedure like sacking Ross Wilson right.

According to the Sunday Star Times Smith hadn’t managed to properly sack Wilson by midday Friday and may not even have managed it so far:

when Smith announced Wilson’s sacking he skipped a vital legal step advising the board secretary in writing.

This left Wilson and Judge in limbo, at least until noon Friday it could not be clarified last night whether the changeover had been made legal since then.

Smith is also planning to sack some members of the ACC board, and wants a new board in place by the end of the month.

It is relatively easy for ministers to sack board members, but certain boxes must be ticked. These include the minister giving written notification to the board member, and sending a copy to the board secretary. It is understood Smith fudged both these steps and that as late as lunchtime Friday no letter had been received by the secretary.

Of course the whole ACC debacle has seen Bill English lying about who was to blame for it not being in the prefu, Nick Smith lying about how much levies need to go up next year and about the state of the scheme’s finances and John Key lying about the sacking of Wilson and his replacement with a business round table mate “not being political”.

And now we find out they can’t even follow the simple process required to remove Wilson properly? What a bunch of lying clowns.