A decent job with fair pay 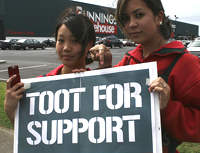 That’s what the labour movement is all about: ensuring that people who want to work can find jobs and that they receive fair reward for their labour in decent conditions, so they can afford a good standard of living for themselves and their families. A job gives people a sense of purpose, a feeling that they are part of society, useful.

Good wages and conditions make people feel respected and enable a decent standard of living. With employment comes lower crime, fewer suicides, better health, and a dozen other better social outcomes. Work enables people to fulfill everyone’s most basic dream: a good life for themselves and the ones they care about.

The right-wing destroyed that dream for many New Zealanders in the 1980s and 1990s. From 1988, the number of New Zealanders with jobs started falling even as the population kept growing. Things got worse under National: it wasn’t until 1996 that the number of kiwis with jobs reached the same level as in 1988, there were many more unemployed. Those that did have jobs often had worse pay and conditions. National’s record on employment is pathetic; the number of jobs grew only 29,000 a year on average.

166,000 people were on the unemployment benefit when Labour came to power; 166,000 people whose potential was being wasted. The lead priority of the Labour-led governments has been fixing this problem; 47,000 jobs a year have been added. Wages have grown 25% after inflation in eight years. Reports from the Labour Party congress are that the biggest applause of all came when Helen Clark announced that the number of people on the unemployment benefit is now less than 20,000, the lowest number since 1979. An astounding achievement, of which Labour and the labour movement can be justifiably proud.

30 comments on “A decent job with fair pay ”