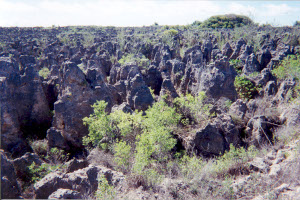 Our economy depends on other key resources apart from oil. For instance our farming sector still depends heavily on using phosphates to increase soil fertility. Since our farming sector provides at more than half of the export income, it got a little disturbing to read about the limited security of supply.

For most of last century farmers have been steadily mining out the world supply of guano which is the major source of concentrated phosphate deposits. This has resulted in islands like Nauru being leveled down to bedrock and karst. A large chunk of their population largely relocated to NZ.

The importance of phosphate to the type of farming we do in New Zealand cannot be over-emphasized. The FarmGeek says

NZ currently uses about a million tones of phosphate fertiliser each year. Its use underpins our entire agricultural economy so in the context of global shortages of oil and other resources, it should play a big part of our discussions. According to the U.S. Geological Survey ‘There are no substitutes for phosphorus in agriculture’ (organic and permaculture aside).

What is worrying is that..

We currently import 80% of our phosphate fertiliser from Morocco.

Apart from the fact that the phosphate comes from the disputed Western Sahara, the area isn’t exactly politically stable. The Oil Drum describes the recent state in Algeria & Morocco: Natural Gas Cartels, Fertilizer Mercantilism, and Rising Tensions – the title says it all really.

The FarmGeek points out that the price of phosphate had a 10 fold increase in price last year. It is probably coming down now as demand lessens with recession cutbacks in farming expansion. There is a single major deposit in NZ at Milton that FarmGeek says

This deposit could provide us with 10 years of self-sufficiency in phosphate if it proves viable to extract it. Once world phosphate supplies start to decline, they are gone forever so surely the smart thing would be to keep ours in the ground as long as possible, giving us a 10 year window to mitigate against peak phosphate by adopting new practices. Industrial agriculture and horticulture will not exist without an abundant cheap supply of phosphates and we know a time is coming when they will be gone.

Something as vital as a 10 year reserve of phosphate should be nationalised as part of a complete food security strategy – this is simply too important to leave it to the markets to decide what to do.

Yeah right! I can just see this do-nothing government doing something as forward looking as that (and interfering with the markets as well!).  It is hard enough to for them to admit that there are resource limits anywhere that the market is unable to handle – for instance in the ability of the biosphere to suck up greenhouse gases.

However this is one of the National party core constituencies – so it’d be interesting to see how they handle this issue. Personally I suspect that they will hide their heads and hope it goes away (which the Milton deposit will do shortly).  It is a key deficency of the NACT’s.

9 comments on “A key birdshit shortage ”