The paleoclimate record shows that in the distant past, >10 deg C of warming (or cooling) has occurred in a time frame of only one or two decades which shows that the Earth’s systems can respond far faster than normally thought.

For some time now, 350 ppm of CO2 in the atmosphere has been considered a “safe level” of atmospheric carbon dioxide from a global warming standpoint, and hence an important goal for climate change activists.

We have now blown past that number with no prospect of returning to that level of carbon dioxide within any time frame relevant to current society (a few hundred years). In 2016 the Mauna Loa observatory has consistently recorded CO2 levels in the 400 ppm plus range. 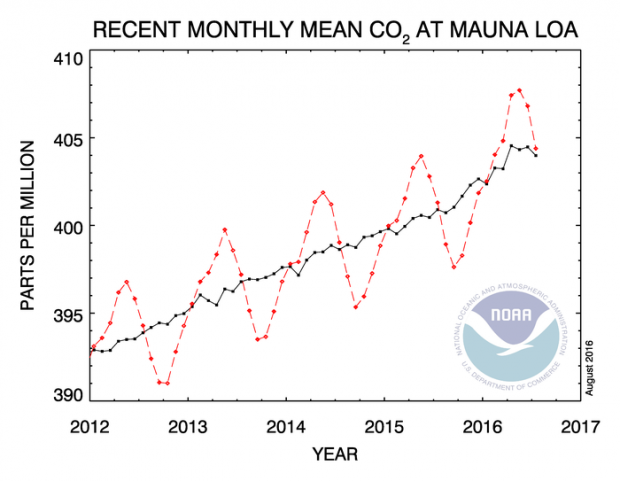 But in fact it has been known for years that CO2 makes up only part of the greenhouse gas (GHG) picture for the Earth. Methane is a very powerful GHG, and although it breaks down in the atmosphere relatively quickly (unlike CO2 which is a highly stable molecule) it is still considered 29x more powerful a GHG over a one century time frame.

Throughout the European dark ages, middle ages and the Rennaisance, methane levels in the atmosphere sat around 0.7 ppm. But from the 1750s a massive and rapid rise in methane levels occurred. Some directly released by man; some as a result of positive feedbacks occurring in nature (like the destabilisation of under sea methane hydrates or the thawing of terrestrial permafrost). Currently atmospheric methane levels are sitting around the 1.8 ppm level.

This level of methane is by far the highest level in the (geologically brief) experience of homo sapiens.

In terms of GHG warming potential this increase in methane is the equivalent of adding another 32 ppm of carbon dioxide to the 400-plus ppm of CO2 currently in the air.

The chart below by Reg Morrison suggests that based the last 400,000 years history we are on track for well over 4 deg C warming, and even towards 8 or 12 deg C increase. No one knows whether it will take us 40 years to get there, or 400 years, however. But indications are that get there, it will. 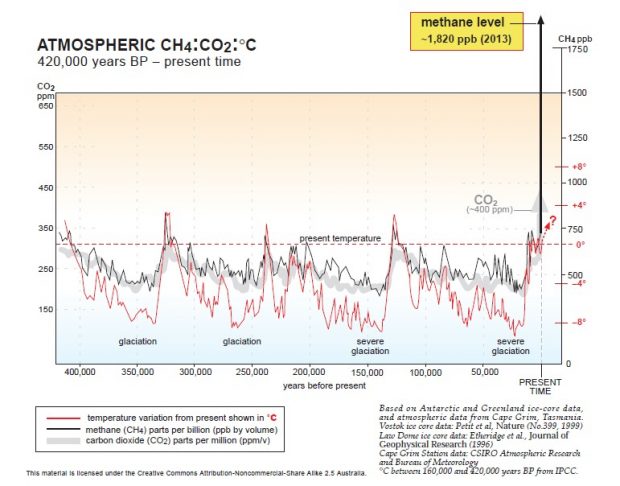 Of course, there are also many other more minor GHGs, including ozone, water vapour, CFCs, nitrous oxide and more. Some of them extremely powerful in effect compared to CO2, but far less common than CO2. What would really be useful is if someone put together some figures for what the total effect of all these GHGs add up to, in terms of a carbon dioxide equivalent figure.

Fortunately, the United States NOAA has done just that in the form of their Annual Green House Gas Index (AGGI). 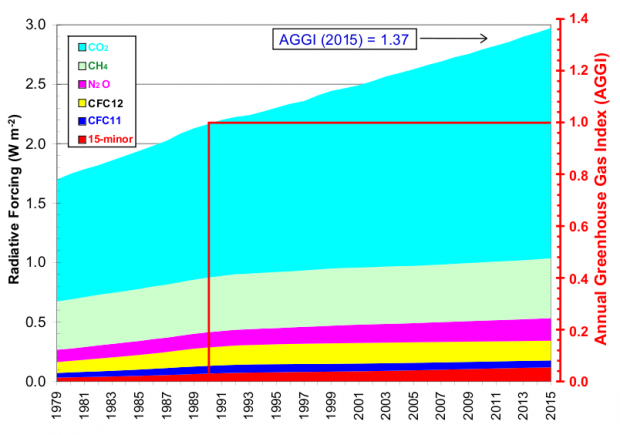 You can see from the bright blue-green in their graphic that CO2 makes up the lion’s share of the Earth’s total greenhouse gas effect (approx 2/3), while methane and other gases make up the rest.

You already know what the total GHG equivalent is from the title of this post: 485ppm CO2. And from these charts, you can see that there is no sign of the last few decades increase in GHG effect slowing down in the slightest.

In summary, there is zero chance of returning the GHG balance in our atmosphere back to the ~350 ppm of the 1960s and 1970s.