Whatever people say I am, that’s what I’m not. 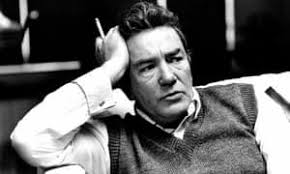 Finney’s career was astonishing; his breakthrough was in the lead role in ‘kitchen sink’ drama Saturday Night, Sunday Morning in 1960.

Over the next 50 years he starred in a kaleidoscope of roles; Tom Jones, Scrooge, Hercule Poirot, Annie’s Daddy Warbucks, Winston Churchill, lawyer Ed Masry in Erin Brockovich, Leo O’Bannon in Millers Crossing, the list is long and starred.

5 times nominated for an Oscar, he never won. However, his films often did pick up awards, which might indicate how seamlessly he played his roles. He was an integral part of the movies he made, but never flashy or actorly.

Finney used his success to help others get their start in the film game. He bankrolled and publicised the early works of Lindsay Anderson (If… and its follow-up O Lucky Man!) and Mike Leigh’s 1971 debut Bleak Moments.

Albert Finney will always be remembered as one of cinemas ‘angry young men’. The late fifties and early sixties in British stage and cinema were dominated by plays and films that were not just reflective of post war life, but actively dismissive of the pillars of the state and society.

In 1957, British PM Harold Macmillan said the people have never had it so good.

Finney’s cynical machinist Arthur Seaton said we’ve never had it at all.