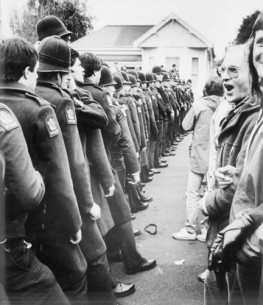 Now this is pretty damn funny and just adds to todays absurdities over the waste of money on rugby world cup TV in 2011. From Granny Herald with the title “Minto Walkway sparks outrage“.

Veteran Springbok Tour protester John Minto has found himself at the centre of a new Eden Park storm, with a controversial plan to name a nearby road after him.

The Eden Albert community board has recommended a link lane – being built for next year’s Rugby World Cup – be named either Minto, Mandela or Porangi (crazy) Walkway.

The board is against the road and chose the names Minto and former South African President Nelson Mandela for their connection to the 1981 Springbok Tour and porangi – Maori for “crazy” – because of the amount of money being spent on the project.

I was there in 1981 for a long peaceful protest at the 3rd test until the police violently ‘cleared’ the street. I then had to go to the hospital to get stitches in my lip after an policeman with a switched badge number tested his baton on my face (and Judith Collins wonders at the lack of respect for police?).

I think that it is a wonderful idea to use any of these names to mark the local history. It is also an effective protest for this $3 million dollar cost lumped onto the ratepayers for this road. However I’m sure that there are going to be a pile of humorless whiners who don’t think that.

I grew up in Mt Albert within walking distance of Eden Park. One of these names will effectively mark the history of the 1981 Springbok tour far better than some old rugby player. I suspect that many of the local community there will feel the same, not only about the historical import, but also about the excessive costs to them as ratepayers.

Mr Minto said it was nice of the board to think of him, but he would not support the proposal. “In reality it’s just poking a bit of fun at the council for spending all this money.”

Mike Smith, of the city council’s business development unit, said new roads could not have the same name as an existing one and there was already a Minto Rd in Remuera.

Now what will be interesting to watch will be the reaction of our local dictators in the Auckland Transition Authority. Will they allow local community boards under the Auckland super-shitty to name local streets? Or will this go into their pile of things that they think should be handled by one of the ubiquitous unelected corporate entities run by the Minister of Local Government (Rodney Hide) that are swallowing up most of the decision making in city?

27 comments on “Alternate forms of protest ”