The many and varied problems with the Ruataniwha Dam proposal 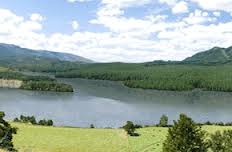 The saga of the Ruataniwha Dam raises a number of interesting issues.

The Nick Smith appointed Board of Inquiry includes ex National MP Alec Neill who also served as the chair of Environmental Canterbury before the board was sacked by the Government.  As said by Marty G in the Standard 4 years ago the cause of the coup was that the organisation was too “science led” and the staff were too “green”, by that I presume they meant that the staff were concerned about the environment.  The failure of the Government to restore regional democracy in the area still rankles.

Neill is eminently qualified and his sacking as a ECAN Councillor belies the lack of justification for that decision but his presence has raised eyebrows.  The rest of the board include an  retired High Court Judge, two lawyers and a Dam Engineer.  There is no one with environmental credentials on the Board and this is of concern.

I have posted on DOC’s processing of the original draft submission previously.  Smith was told about the draft at a usual briefing, that evening the manager involved emails senior managers and says that Smith wanted to see “the submission”.  Then two days later a revised submission is shown.  A 34 page submission expressing concern that nitrate levels in the Tukituki River may become toxic by the proposed changes is replaced by a two paragraph submission that is neutral.

A staff member involved in preparation of the original submission has since resigned, pretty obviously in disgust at what has happened.

This is scarcely believable.  The original briefing note said that “a submission should be lodged to the plan change in the name of the Director-General requesting that the Board requests further information by way of an independent peer review of the proposed approach to nutrient management and the potential effect of the proposed nutrient limits and targets on the freshwater values in the Tukituki coachmen.”

The final submission said that the department had considered “the robustness of the nutrient modelling, the strength of the regulatory process proposed and the conservation values at risk within the specified catchment” but it was only going to submit on resource consent issues relating to the Makaroto dam structure.  Between Monday and Wednesday DOC had changed its mind from requesting that there be an independent peer review of the proposed approach to nutriment management and the possible effect on freshwater values to just worrying about RMA issues relating to the dam itself.

The Department had decided not to submit on the one nutrient management approach “as the conservation values of the Tukituki catchment do not justify the resource investment required”.

I am finding this increasingly difficult to understand.  The draft submission had been prepared.  All that was required was someone to go along and speak to it.  The issues were important ones to raise, the one nutrient management approach was risky, there were doubts about the modelling and further analysis was needed.  The draft submission asked the board to seek further information in relation to the risks and to seek an independent peer review in relation to the nutrient management approach.  These were costs that the Hawkes Bay Regional Council would logically have to meet.  There is something wrong with the claim that the resource investment required meant that these important questions should not have been asked.

The Hawkes Bay Regional Council has complained about the Radio New Zealand reporting on the issue, specifically the claim the scheme could kill the river.  From the article involved it would appear that this particular comment was an interpretation of the submission rather than a quote from the submission but the way I read it the original comment is fair.  After all allowing for significant increases in Nitrate levels to “toxic levels” can fairly be equated to killing the river.  And you have to wonder at the utility of a public entity taking another public entity to a third public entity to sort out where the truth of the matter lies.  The HBRC would be better advised explaining to the public why the concern is not justified.

EDS and Forest and Bird are complaining that their experts are unable to visit the dam site until October 10 but their evidence is due by October 8.  The landowner is, for his own reasons, refusing to allow access.  There is a simple solution, extend the time for the filing of evidence but to date this has not happened and you have to wonder why not.

Forest and Bird is also concerned because NIWA’s modelling is not available for analysis.  NIWA is claiming that it is intellectual property.  Its position if endorsed will mean that an assessment system will be approved without the public being allowed to understand how and if it will work.  We live in a strange world where commercial sensitivities prevent us from checking to make sure that theoretical models that control the future of the health of our rivers are fit for purpose.

And finally it has been disclosed that GNS Science had its contract to provide advice to the Hawkes Bay Regional Council cut short.  It had been contracted to perform four pieces of work for the Council but completed only three.  Russell Norman made a number of startling claims by way of questions in Parliament including the following:

So we have a Minister chosen Board of Inquiry without scientific expertise, a magically disappearing draft DOC submission, submitters who cannot complete expert evidence because they cannot access the site, a modelling system that is untested and no one is allowed to analyse, and a highly respected Scientific Crown Institute whose involvement in the project was terminated because its scientists objected to the accuracy of the data that it was being supplied.

There is something wrong with the Ruataniwha dam proposal.

UPDATE:  In comments A Thompson has pointed out that Justice Chisholm was previously a High Court Judge not Environment Court Judge and that one of the other lawyers, Mathew Lawson, has a science degree, as well as his LLB, and has been involved as the chairman of the Hawkes Bay ECOED Trust at the Lake Opuahi.