And now from the real Labour Party…

It’s been a good few days. Ratana on Thursday and Friday, and Young Labour Summer School today and tomorrow. And then there is David Shearer’s speech to come on Sunday, at the end of the Summer School.

The Ratana Church gathers to celebrate the prophet’s birthday on the 25th of January. In recent years political parties have paid their respects on the day before. This year, David Shearer came on Thursday 24th with a delegation, including a group from Young Labour on their annual Clarion tour. 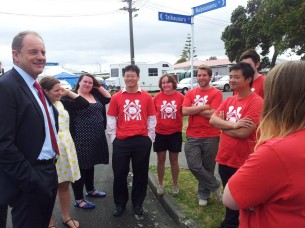 David Shearer stayed over to attend the main day service in the Temepara. Party President Moira Coatsworth was there too, as was I. This followed from last year’s invitation from David Shearer to Ratana’s Tumuaki, Haare Meihana, to visit Labour in Parliament, as TW Ratana had done. That visit has led to ongoing discussions between Labour and Ratana about how to recognise and consolidate the long-standing relationship in today’s world.

There were a number of other happenings at Ratana, all interesting. The Maori Party chose the weekend and the venue to ventilate their leadership issues, and the Mana Party climbed in to the debate. My impression was that this was not appreciated at Ratana, where TW Ratana’s message of kotahitanga and rangimarie is paramount.

John Key argued, when the National Party visited, that while Labour had a relationship with Ratana National delivered. He cited rebuilding of houses at the Paa and recent Treaty settlements. This too did not go down well. His hectoring tone made it sound as though Ratana Maori should have been grateful for their blankets. It was also not lost on anyone that while National may have finalised some Treaty settlements, it was Ratana’s Labour Members of Parliament Matiu Rata and Koro Wetere who had been Ministers when Labour passed the Treaty of Waitangi Act in 1975, and the Amendment Act in 1985 that allowed the redress of grievances back to 1840 that made these settlements possible.

I have been going to Ratana for the celebrations for many years now. The korero has always been highly political, going back to the days of the prophet himself, and Labour’s first visit by Harry Holland. There is no question in my mind that Maori are intensely interested in the next election, and that their view may well be shifting in favour of the old relationship with Labour, that has delivered far more to morehu whanau than any of the more recent arrangements. As my old colleague Mike Williams would say, watch this space.

Young Labour’s summer school was also a delight. I had no idea of what pleasant places lie behind Wainuiomata, and enjoyed listening to the bellbirds as well as the insights from the likes of Rod Oram, Brian Easton, Anna Hamer-Adams and others.

Summer School was started by Alastair Cameron and Jordan Carter in 2003, at which I presented the first session on an Introduction to Social Democracy. 120 Labour members registered for this year’s school, young and old, including Alastair and Jordan, although Young Labour continue to organise it. Their forward-looking influence was shown in this year’s theme – “Labour’s Unique Narrative for the Future.”

A usual, it was stimulating, refreshing and inspiring. Labour has a great group of young ones, all optimistic and all active. It was also great to be able to say “Happy New Year” to David Cunliffe who was there, as was Trevor Mallard.

The scene is set. 100,000 houses has National on the run. I’m really looking forward to David Shearer’s speech tomorrow.

143 comments on “And now from the real Labour Party…”