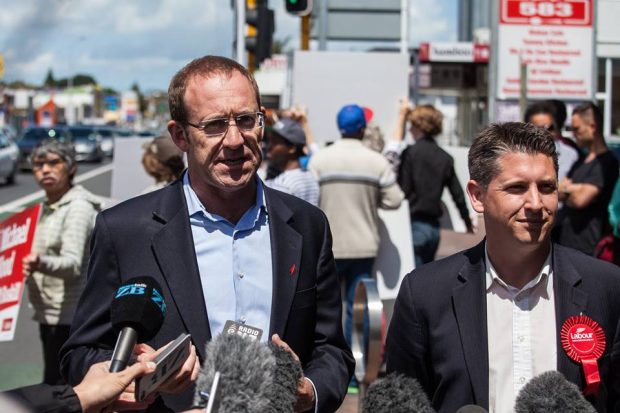 A message from Andrew Little from the Labour Party’s website:

The slogan of Hillary Clinton’s campaign is ‘stronger together’. It’s an idea that I think also applies to how I have approached leading the Labour Party and the Opposition. It explains why we have had so many wins in the last two years, and why the polls show the race for 2017 is now neck and neck.

The right wing of politics is always about dividing people from each other: whether on ethnicity, employment status, sexual identity, or simply those who have and the have nots.

I don’t buy that kind of politics. I believe if we all work together, we can achieve the good life we all aspire to – the Kiwi dream of a decent place to live and own, a good job that pays a fair wage, and public services that are there to keep us safe, keep us healthy, and give our children the best education.

We’ve worked hard to build a culture of unity. You see that in the MOU with the Greens, and in our cross-party homelessness inquiry as well as our close cooperation with the unions. When National can’t divide us, we win.

We won on zero hours, which has had a huge impact on many thousands of workers and their families.

We won on Keytruda and better funding for Pharmac.

We are winning on housing – every week, National is forced to adopt policies that are pale imitations of ours while still refusing to admit there’s a housing crisis.

We are winning on safer communities – with National preparing to concede they got it wrong and we need more police. We have won these fights, together.

And, together, we have taken the agenda away from National. They are now trying to play catch-up or reflexively opposing much-needed policies (like Auckland light rail) just because they come from Labour.

There’s a year to go until the next election, and the polls show that Labour and the Greens are neck and neck with National/ACT at 40-45% each. That’s a huge improvement on the 2014 election result. We’re on the rise; they are on the way down.

Together, we can win next year. We’re going to win because we are committed to restoring the Kiwi dream for all New Zealanders through a set of sensible ideas including:

Our positive plan is winning. All National can do is make excuses for its failures. But winning won’t just happen by itself. We all need to pull together, to work together, and reject National’s attempts to divide us. We need to get the word out to our friends and family that we are on track. We need to support the work that Labour and its partners are doing.

We are stronger together, and it is through that strength that we can change the government next year.

If you support Labour’s vision and you want to help change the government – click here to say you’re in.

167 comments on “Andrew Little: Winning together ”