Apply the brakes, before it’s too late

The real estate agencies and the newspapers, both of which have an interest in a booming property market, are predicting that housing prices will surge over the next three years.

Apparently, houses will go up 11% this coming year and 24% over the next three years. Let’s have a look at what that looks like, once inflation is taken into account: 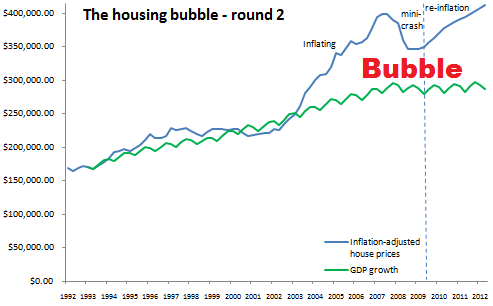 You can see how the housing bubble emerged in 2002-2003, when house price increases broke with the pace of GDP increase and started heading for the stratosphere. Over the last year and a half, there’s been a bit of a retrenchment. But the bubble has not deflated. Now, the bubble is meant to start inflating again. By 2012 it will be getting back to the same perilous heights it hit in 2007.

Crazily, in defiance of all we have experienced and seen in other countries in the last two years, we are heading into another round of the upper-middle class selling existing houses to each other at ever-higher prices financed by borrowing from overseas from lenders who want to exploit the higher interest rates they can get here. That will, again, push the exchange rate higher and higher, screwing over exporters.  At some point, as has happened in every debt-driven bubble in history, lenders will start to doubt our ability to pay our debts, and then they’ll stop lending to us, and then we’ll be screwed. The longer the housing bubble continues, the harder crash.

But we have a choice. House prices can return to sane levels gradually now, or in a wave of economic destruction later. The Government can choose which path we take. It should move now by introducing a capital gains tax and/or a variable rate mortgage levy, and increasing the housing supply with a major green state housing programme that would also create jobs.

I think English gets it but Key always wants to find the easy route, always wants to kick for touch. So, we won’t see any decisive action now while it matters. Even if English does manage to get some tax reforms through he’ll wait until the tax working group reports in December and introduce the chances in Budget 2010 to come into effect in 2011.

It will be too late by then.

27 comments on “Apply the brakes, before it’s too late ”