Are you smarter than a 10th year?

Meet Robert Wadlow. When he died in 1940, he was the tallest ever recorded person, standing 8 feet, 11 and a half inches tall (2.72m) . That record still stands. The tallest living person, Bao Xishun, is a comparatively puny 7 feet, 9 inches (2.36m). As we all know, the typical person is getting taller. Over the 90 years since Wadlow was born, the height of the average American man has increased 5 centimetres, yet, there has never been a taller person than Wadlow since he died.

Now, which is the more sensible statement?

– ‘Wadlow was an exceptional person, we know why he was so exceptionally tall (hypertrophy of his pituitary gland).  Even though no-one has been taller than him since, the average person is definitively getting taller.’ or

– ‘Since no-one has been taller than Wadlow, everyone after him has been shorter ipso facto people are getting shorter’ 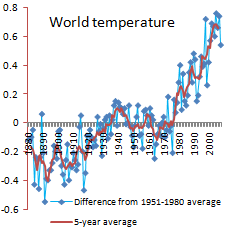 Why am I going on about tall fellas? Because of this graph, one I didn’t think I would need to add to my post on climate change yesterday. Sadly, I was wrong. A lot of people are still parroting this ‘the world’s being getting colder since 1998’ rubbish.

1998 was the hottest year on record, until 2005 and 2007. We know why these years broke the records and why 1998 was so much hotter than other years around it. The El Nino weather pattern results in the ocean and atmosphere being warmer than in non-El Nino years. There was an extreme El Nino in 1998 (you might remember the serious drought it caused).  But, just like the fact that no-one has been taller than Wadlow doesn’t mean we are getting shorter, the fact that the 1998 record stood for seven years didn’t mean that the average annual temperature wasn’t rising. There will be exceptionally hot years, there will be exceptionally cold years – but the trend is all up. (oh and another El Nino has just started, it looks like it’ll be a most severe on record).

*of course, the average adult will be dumber than an exceptionally smarter 10th year but that doesn’t mean people get dumber as they age into adulthood 😉