The publicity onslaught on Auckland Council this week was somewhat predictable although it could have been handled better.  There were some pretty simple mistakes made.  The spending of $1,296.60 excluding GST on a small celebration after the budget passed was bound to attract attention.  Clearly it did not matter how much or how little the amount was it was always going to be news.  Spending council money on a celebration after rather significant increases had been passed was insensitive and gave the Herald and others the perfect opportunity to attack.  Although I should note that as an employer I regularly put on drinks for my staff and in that regard can see nothing wrong in principle in Council doing the same.

A whole lot of figures have been thrown about concerning the increase and horror stories of $1,000 plus increases in yearly rates have been talked about.  The Herald claimed that tens of thousands of ratepayers would be paying more than a thousand dollars a year in increased rate payments although when it was pointed out to them this figure was wrong they responded by a rather weak retraction. 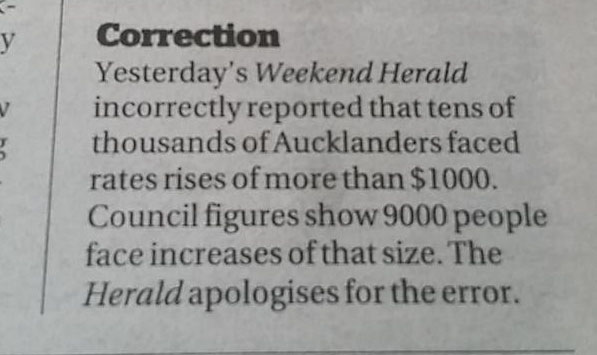 The basic figure, which no one seems to be talking about, is that there will be a 2.5% increase in the total rate take plus a transport levy on top.  There are winners and losers which mean that for some the increase will be more and for others it will be less.

I have always questioned the rationale for this policy.  Businesses tend to generate considerable use of community resources.  Workers drive to and from their places of work.  Commerce depends on the transportation of goods throughout the region.  And a well designed and functioning city is good for business.  In my view the current level is more than fair.

And besides reducing a business’s rates bill will tend to improve their bottom line and increase their profitability as well as their tax bill.  Conceptually a third of any reduction in rates may be paid to Central Government by way of increased taxes.  Council’s loss is at least in part the Government’s gain.

If it was up to me I would have not reduced the business differential and this would have resulted in residential rates increasing by 2.5%.

Out west local ratepayers also benefit.  From June 1, 2015 the region has finalised a move to rate equally all property of equal value, no matter where it is located.  This benefits out west because on a pro rata basis rates were higher.  But this means that rates in other parts of the city will have to increase to compensate.

The other increase to rates was the transport levy set at a fixed amount of $114 per ratepayer.  Ross Clow opposed the move on the basis that the change was regressive.  Sky City will be paying the same amount as a resident in Piha even though the former’s benefit from an improved transport system is way bigger than the latter’s.

It did not have to be this way.  National has ruled out every attempt Auckland Council has made to establish an alternative funding source.  Auckland’s request for power to impose a regional fuel tax was ruled out as was tolling.  And with Auckland’s commitment to completing the inner city rail link to prevent chaos in 2018 when at current trends Britomart hits peak capacity the Government’s delay in providing support looks like political games being played at the expense of Auckland’s future well being.

One of the government’s preconditions for support, that Auckland city centre employment increases by 25 per cent over current levels, is ridiculous.  If the patronage is increasing then the transport infrastructure needs to be put into place.  It should no matter what particular purpose the infrastructure is being used for.

Generally I support the notion of an increase in rates so that Auckland can fund something that for ideological reasons the Government appears to be incapable of supporting.  And the clock is ticking.  If the inner city rail link is not started now then there will be chaos in Britomart in a few years time.  But this should be paid out of rates and not out of a special levy where the rich and powerful pay the same as the poor.

The politics are fascinating.  The group of councillors who supported the budget were from all parts of the political spectrum.  The Auckland Ratepayers Alliance, a shadowy organisation with links to the Taxpayer’s Union and the National Party have released this graphic.

Of the ten who voted for the budget three have strong National links, list candidate Linda Cooper, former National MP Arthur Anae  and Bill Cashmere, and one, Penny Webster, is a former ACT MP.  Alf Filipaena is the only Labour Councillor to support the budget although progressives Mike Lee and Wayne Walker also voted for it.

But to be frank the debate should never have got to this.  The final vote should be pro forma after all the different proposals have been previously debated and voted on.  The repercussions of not passing the budget are very scary.  Are we descending into US Republican type lunacy?

Writing this made me nostalgic for the good old days of Waitakere City where things were simpler, there was more democratic control of the city and we had hopes and aspirations to turning the area into an eco city.  It is time to reconsider super city and consider a more democratic more locally based alternative.

[Edit:  Apologies slightly messy draft published instead of final draft.  Have made some minor corrections to text – MS]

69 comments on “Auckland Council and the latest rates rise ”