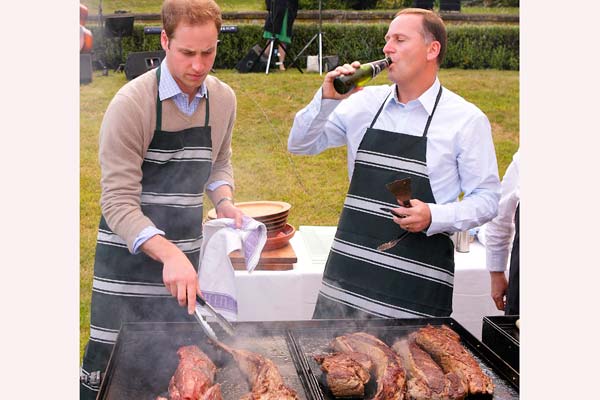 Just in case the misery of 2016 was presumed to be the preserve of the bourgeoisie left like myself, or music-lovers, its misery has hit the conservative side as well with John Key’s resignation.

The world will be redeemed one barbecue at a time.

This is the season of end-of-work functions; the inexperienced get shitfaced and shagged, the rest endure the soggy blabbing of those they’ve come to despise and otherwise perpetually complain about internally: your colleagues.

I have a suggestion.

It’s also the season of broader family gatherings that occur before Christmas Day itself. Where you drop the children off at the ex’s to fulfill miserly custody agreements, whether childcare was paid or not. Births and illnesses to console or chew over. Moments of tension, regret, pathetic micro-management and perseverance.

Then of course there’s those final Trust and NGO and PTA and Board of Trustee and Daycare functions, for a final drinks and a cupcake. Impatience and regret at the smallness of efforts, of things half-done, half-baked, or plain old undone.

Finally, Christmas Day. The forced formality, the dull stress of expectation, bonhomie and melancholy over those who have died, playing stupid games we think we can still play, occasional drunken outbursts.

Talk it endlessly. Let the old Prime Minister be your opening, and the floodgates of frustration will simply pour out of everyone. I see it around me already, hugely.

It;s hard to stop once they start. The season we are in allows people to think politically. Make sure you bring good facts to bear. If you’re really lucky, keep your cool as the National supporters lose it in grief and everyone else sees how rational and calm the left really are (!)

Of all the earthquakes we could possibly have endured, the year is ending here with one of the politically biggest of them all. The left won a by-election, and the rightist government cracked wide open without any of Labour and Greens’ careful democratic release-valves.

Get talking. Get drinking and talking. Have confidence and fun in your arguments. This kind of moment doesn’t come around very often in a parliamentary term.