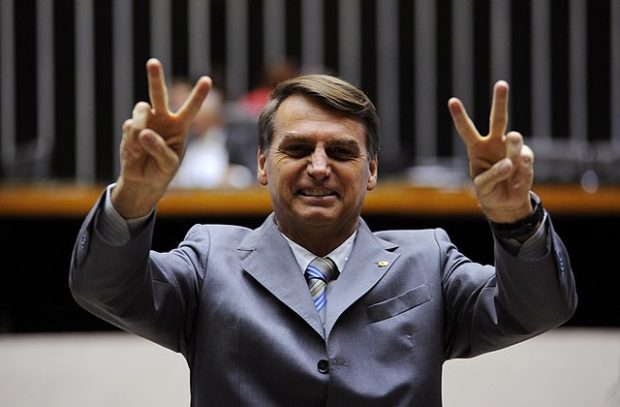 In further bad news for the world Brazil has turned to the right with the election of a leader that makes Donald Trump look like a moderate.  From the Guardian:

Jair Bolsonaro, a 63-year-old former paratrooper who built his campaign around pledges to crush corruption, crime and a supposed communist threat, secured 55.7% of the votes after 88% were counted and was therefore elected Brazil’s next president, electoral authorities said on Sunday.

Bolsonaro’s exact lead over his rival, Fernando Haddad, will be clear when the full official election results are announced shortly.

News of the exit poll result sent Bolsonaro devotees outside his beachfront home in western Rio de Janeiro into ecstasy and drew huge crowds out onto Avenida Paulista, one of São Paulo’s most important boulevards, where they sang Brazil’s national anthem and set off fireworks.

But Bolsonaro’s triumph will leave many millions of progressive Brazilians profoundly disturbed and fearful of the intolerant, right-wing tack their country is now likely to take.

Over nearly three decades in politics, he has become notorious for his hostility to black, gay and indigenous Brazilians and to women as well as for his admiration of dictatorial regimes, including the one that ruled Brazil from 1964 until 1985.

“The extreme right has conquered Brazil,” Celso Rocha de Barros, a Brazilian political columnist, told the election night webcast of Piauí magazine. “Brazil now has a more extremist president than any democratic country in the world … we don’t know what is going to happen.”

The Brazil result matches what has been happening recently in Europe with many governments turning right over the past few years.  Although there was good news in Ireland with Michael Huggins being re-elected as President.

Meanwhile, Ireland has just re-elected a president who speaks like this. pic.twitter.com/oVLUdWr70Y

The continuing success of the right throughout the world is of concern. All that it does is embolden conservative parties and their more extremist elements.

And what is the left wing antidote to this? If I can sum it up in far too few words it is provide an alternative. Talk about hope and kindness as Jacinda does. Have politicians, like Jeremy Corbyn, who have always stuck to their principles and have based their political career on ideals not game playing.

It will be interesting to see if the right wing in National take this as a reason to push the hard line.  Although I think they would be better to see what happens with the US mid term elections.  The prospects look intriguing with Nate Silver thinking there is a high chance that the House of Representatives will flip to Democrat control.

But time will tell.