British PM Theresa May will meet with her cabinet overnight, our time. At the end of that meeting, she will let the long suffering public know which of five politically unpalatable Brexit options the Tories have decided is the least worst.

This follows another calamitous day in Parliament, in which two potential ways out of the morass were narrowly defeated in the house and another senior Tory quit the party.

April 12 is the date on which the UK is scheduled to leave the EU without a deal. An extension is still possible, but the EU has indicated it would only allow more time if May changes direction.

Let’s have a look at Theresa May’s remaining options. 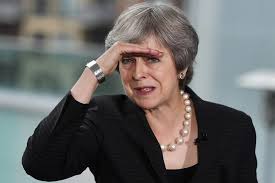 Theresa May’s preferred withdrawal agreement has been rejected three times so far, admittedly by decreasing margins, (230, 149 and 58 votes).  However, 30 MPs would need to switch sides to get the Prime Minister’s Brexit deal over the parliamentary line, which seems unlikely.

May would need Labour votes to implement this kind of soft Brexit. John Major, the former Tory prime minister, has urged talks on forming a national unity government with Labour to do this. But such a coalition would almost certainly divide the Tory party in a way that might doom them as a future electoral force.

PM May would need a two-thirds majority in the House of Commons to dissolve parliament, which could be engineered either as a positive vote for a snap election or as a vote of no confidence in her own Government.

However, would all Tory MPs support a fresh election? Would Labour? And what would happen if the election result is the same Parliamentary make up?

And there is, of course, the possibility most dreaded by the right; Jeremy Corbyn becoming Prime Minister while the Tories disintegrate.

After Mrs May’s deal was rejected again on Friday, the European Commission said that it was ready for a No Deal crash out at midnight on April 12. The problem is that Britain is definitely not ready for that outcome.

A second referendum is possible, but unlikely, despite a million or more Brits marching in support of a fresh vote just days ago. However, a weaker version of a re-run ballot is also being mooted. This would be a ‘confirmatory referendum’ on an agreed Brexit deal; a Yes/No vote.

There are many in the Tories who would swallow that dead rat rather than have a snap election.

So those are the five choices that might lead to Brexit.

Oh, there is one more option, of course.

May could just resign:

Well, why not? This was never a fight of Theresa May’s making. She must know that her political obituaries are being written already, particularly after offering to resign if Parliament agreed to back her deal.

Deal or no deal, she’ll be resigning in a few short weeks, so why bother with what the EU are now cheerfully call a shitshow?

Why not just quit and leave Brexit to Boris Johnson to royally bugger up?

Her lasting legacy could be that she finally gave Britain what it wanted; her resignation.

UPDATE: Theresa May has called on Labour Leader Jeremy Corbyn to meet to discuss a cross party approach. In reality, that means trying to find a compromise that most of Labour and a majority of the Tories can support.