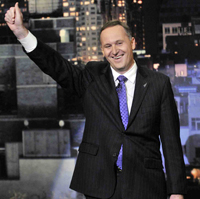 Well, that could have been embarrassing. John Key on the world stage, along with leaders of other countries in what has been billed the ‘greatest debate on Earth’ had the potential to be very painful.

It goes without saying that he would have treated the whole thing as a PR event. National was already preparing the ground for it in the same manner as they did the Letterman appearance. Key might not actually have whipped out ‘the top ten reasons why I am “somewhat suspicious” of climate change’ but he would have struggled to foot it in a top-level public debate on the issue, and New Zealand’s embarrassing backward steps under his government would have been exposed to all the world.

I think that is probably why Key was bumped. The debate is meant to be a serious discussion of how the world can tackle climate change. Having a Prime Minister there who has stripped back his country’s climate change policies to the bone wouldn’t have made sense. I mean, what would he have said ‘yeah, we took the existing Emissions Trading Scheme, which although world-leading was too weak, and reduced it into a $110 billion lolly scramble for polluters’?

The reality is, New Zealand is now in the obstructionist camp at Copenhagen. The old alliance of the Anglo-Saxon settler-states (the only developed countries in the world where deniers are given any credence) has come together again, this time to block, frustrate, and dilute any international agreement that comes anywhere near being sufficient. Our ‘global alliance’ on agriculture emissions research is a joke – we’re spending less on it than on Key’s bloody cycleway.

No wonder Key was uninvited. Under his watch, New Zealand has gone from climate change leader to enemy of progress.