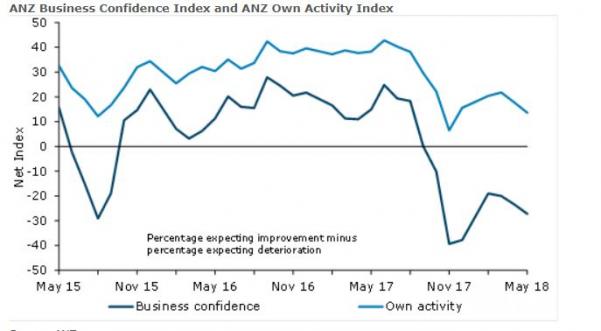 Lately the news has been all doom and gloom about business confidence.

The gloom does not match the data. Rather it seems to be a fit of pique by a sector that is historically supportive of National and resentful that power has been taken away from them. The resent is peaking because of the “threat” of a living wage being implemented and because of an attempt to modestly walk back the anti union policies of the last Government.  If these really are a threat to our business sector we are in big trouble.

But falling business confidence is a phenomenon and something the Government is aware of. It is the reason that Jacinda Ardern spoke recently to the business sector.

She was more gentle with her analysis and rather than criticising business for taking an ideological position she said that the lack of confidence was due to uncertainty.  In her speech she said this:

For instance, average business confidence scores under the Clark/Cullen Government were much lower than the Key/English Government, despite Clark and Cullen delivering higher average growth, lower unemployment, lower debt, larger surpluses and stronger wage growth than their successors.

We appear to have inherited a similar conundrum, we’ve run a strong surplus, have the best net international investment position ever recorded, stable and low interest rates forecast for some time which ought to spur investment and the lowest unemployment rate in a decade.

That then begs the question, if it’s not the overall economic indicators that is driving these figures, then what is? I have discussed this question with both business leaders and representatives, colleagues and officials. The answers I have had back are almost as diverse as the groups I have asked.

Some of those issues I will touch on today, but the overall sense I have is that it would be wrong to over simplify this survey and just call it out as being about party politics, just as it would be wrong to ignore it. It is telling us something, and that something is probably most accurately captured not by confidence, but certainty.

She is right but it is uncertainty created by negative framing and talking down of the economy.  Shades of the last Labour Government’s winter of discontent.

And there has been some scathing commentary from Mitch Harris at Radiolive about confidence surveys.

Another meaningless Business Confidence Survey has been released by ANZ Bank.

These surveys are used to beat up the Government, and they can become self-fulfilling prophecies. But what are they?

They are really two surveys. They ask business managers and owners what they think of their own company’s prospects, and they ask them how they think the overall economy will perform. Most of the recipients say their own business is doing okay, but the wider economy is going to hell in a handcart.

What would they especially know about the wider economy? Running a company is not the same as running an economy. What the survey is really telling us is that a sample of mainly National voters don’t like the Government.

Most of these so-called business leaders are just bureaucrats who have climbed the greasy pole in a large corporate.

ANZ plays the bad cop; with Sir John Key as its chairperson, it constantly releases these irrelevant surveys as some sort of economic canary in the coalmine, telling us that these exceptionally gifted business people are warning us that the Government has got it all wrong.

With Kiwibuild and an intensive housing construction boom in Auckland getting ready to start the lack of confidence seems to be misplaced.  And Herald business commentator, Brian Fallow, who is hardly a left winger, agrees.  From his article in this morning’s Herald:

Whether or not it works as outreach to a grumpy business community, the Prime Minister’s speech on Tuesday deserves to be read.

She makes some fair points.

The first is that the despondent state of business sentiment is really not warranted by the economic indicators.

Jacinda Ardern did not labour the point in a get-a-grip sort of way. So let me.

The cycle is getting long in the tooth and the best of it is behind us but the economy is hardly falling off a cliff.

Skill shortages and other capacity constraints are biting in some sectors. Profit margins are under pressure, the labour market is tightening and the migration cycle peaked a year ago.

But the population and workforce gain from that source is still very high by historical standards and the Government is working on plans for regional skill shortage lists, recognising the shortcomings of national ones.

For consumer-facing businesses, the unhealthy combination of a wealth effect from runaway house price inflation and a negative household saving rate is being replaced, at least partly, by some actual cash income growth.

And not just from the families package which kicked in two months ago. The number of people employed grew 3.7 per cent in the year ended June and their collective weekly gross earnings were up 5.5 per cent.

Some export commodity prices may be wobbling, but the overall terms of trade — the ratio of export to import prices — is at the most favourable level on record, boosting national income. And the exchange rate has moved in an exporter-friendly direction.

So rather than relying on trickle down, rampant immigration and run away house prices the Government is trying to affect the economy in a more far sighted way.  And some things such as Donald Trump’s wrecking of world trade is beyond the means even of Jacinda Ardern to control, talented though she may be.

So there is nothing for businesses to worry about.  Unless your business model relies on rampant immigration and run away house prices.