CGT or asset sales? Which do you prefer?

Generally, no-one likes taxes, so Labour’s polling shows that Kiwis are surprisingly receptive to capital gains tax with 31% supporting CGT on its own merits to 43% opposed.

But head to head with National asset sales plan, the choice was clear: 55% prefer CGT vs 32% for privatisation. In a contest of economic plans, Labour wins hands down.

Even John Whitehead agrees. The just retired head of Treasury is the biggest name so far to come out in favour of Labour’s CGT, which he says has been carefully thought through and has major equity arguments in favour of it. He points out that Turkey is the only other OECD country that doesn’t tax capital gains.

National continues to flounder. English could manage yesterday was to scaremonger about the 35% debt ceiling, even though he can’t guarantee that his own policies won’t breach it because he has booked the revenue from asset sales but not the cost of lost dividends:

Hon David Cunliffe: Given that the Minister’s 2011 Budget has already booked the proceeds of those asset sales, for which he has just confirmed that he lacks a mandate, did his Government’s Budget 2011 Fiscal Strategy Report set the upper net debt ceiling at 35 percent, and what guarantee can he offer that his policies will not break this limit when his Budget does not properly account for the costs of his Government’s plan to sell public assets?

Hon BILL ENGLISH: The 35 percent ceiling is well above where we expect net debt to peak, which will be just under 30 percent. I think this will be more of an issue for the member. If he says he will use a capital gains tax to offset sales of assets, he cannot count the dividends, because they are still in the Budget now. He cannot add dividends from retaining State assets. They are still in the Budget.

Old Double Dipton up to his old tricks. Giving himself a lower debt projection by counting the proceeds from asset sales but not the ongoing cost of lost dividends.

Kiwis aren’t buying it though.

The polls show that disillusionment with National has been increasing for some time but Labour has been unable to capitalise and take voters away from them because it has not been seen as a credible alternative. CGT changes that. Today, we are going to see the guts of Labour’s economic policy. Every economic heavy-hitter is backing it, which will give great confidence to the public that it’s viable. 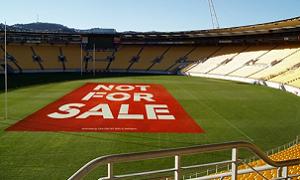 Now, it just comes down to a simple choice about this country’s future:

Do you want our strategic assets sold off to foreigners while some of the wealthy continue to avoid paying their fair share?

Or do you want us to own our future with a fair tax system that takes the burden off work and on to capital gains?

(Awesome image of the Cake Tin from Red Alert, photoshopped of course – as if a political party can afford that kind of advertising spend 🙂 – didn’t stop capital gains tax supporter Cameron Slater getting upset though).