Early last week I made a statement to and complained to the police about Cameron Slater paying Ben Rachinger to try to hack into my computers on the behalf of his mysterious “funder”.

I’d read the various bits of information that Rachinger has scattered across various parts of the net since early this year. It reads just like Cameron Slater 1, and many parts of what he displayed and gave to the police should have been easily independently verifiable – especially the unaccounted “donations” to Ben Rachinger.

I am absolutely certain that Cameron Slater did knowingly pay someone who to gain unauthorized access to my computers. Cam’s farcical PR written denials just read like his usual lying.

That means he and his “funder” were soliciting for someone to commit an offence under Section 249 “Accessing computer system for dishonest purpose“ and/or Section 252 “Accessing computer system without authorisation“ of the much amended Crimes Act 1961. While Section 249 is probably the most applicable because of the benefits and advantages that Cameron Slater hoped to gain from his agent’s work, Section 252 leaves very little room to argue.

(2) To avoid doubt, subsection (1) does not apply if a person who is authorised to access a computer system accesses that computer system for a purpose other than the one for which that person was given access.

Note that these are the offences that whoever accessed the Cameron Slater’s systems last year will also face if they charged before a court.

For most of the data that Rachinger reports that Cameron Slater was after, and apparently thought that Rachinger had acheived,  would have been unauthorised. That is because on my systems they would require “super-admin” status on the website, something that only two people have, or a direct login to the machines which only I have.

That makes Cameron Slater and his funder chargeable under at least Section 311 “Attempt to commit or procure commission of offence“ (2). There are a very limited number of people who could have given Cameron Slater the information that he was reported as requesting.

311 Attempt to commit or procure commission of offence

(2) Every one who incites, counsels, or attempts to procure any person to commit any offence, when that offence is not in fact committed, is liable to the same punishment as if he or she had attempted to commit that offence, unless in respect of any such case a punishment is otherwise expressly provided by this Act or by some other enactment.

Now these aren’t the only parts of the Crimes Act that are applicable. They just seem to be the most applicable.

Cameron Slater is a serial offender at accessing other people’s systems for dishonest purposes and without authorisation. At present there are currently 3 known cases open on Cameron Slater’s computer related offending. They date back to 2011, have a still open complaint that dates back to early 2012, and yet shows no signs of either any charges being laid.

The obvious contrast of the effective lassitude of these police investigation of these computer related crimes is the abrupt search of Nicky Hager. That happened in October 2014, a few short months after Dirty Politics was released.

Only the police can answer why that particular complaint was acted on with such rapidity where other very similar complaints appears to have been ignored or have no apparent progress over long periods of time. However that abrupt action by the police is currently in front of a judicial review and awaiting a decision on the way that they applied for, conducted, and subsequently acted on those search warrants.

Now I think that for trying to procure an unauthorised access to my computers for what I consider to be a dishonest purpose, a repeat offender like Cameron Slater and his equally criminal funder should stand before a judge and preferably be imprisoned. If hackers are a irritating blight on the net  for most computer professionals, then their funders are even more so.

Sure I’m not exactly happy with Ben Rachinger either. But that is more for being a bullshit artist telling idiots like Cameron Slater and his unknown “funder”  what they wanted to hear.  But I’m really not worried about Ben Rachinger for another reason. As far as I can detect (see below) and after some extensive checks, Rachinger has never attempted to get into my systems at anything apart from the public level or beyond the background noise of the thousands of attempted hacks that my systems see every day.

Sure, I think that Ben Rachinger effectively scammed those suckers. They could always try complaining about fraud or a civil suit if they want restitution for their expenditure. But I suspect that the courts will take a dim view of them looking for payback on a criminal act.

The reason why I am sure that Rachinger didn’t manage to actually access my systems? Well that comes from my profession, skills and and experience. So here is a potted history 4

I am a 56 year old computer programmer who has been involved in programming and using computers since I first touched a HP21C programmable calculator in 1976. I have made a living off them since 1985/6 and effectively dropped out of doing management by 1991. I still spend about a quarter of my time learning new systems. That is just my profession, the one I get paid for. Most of the systems I have ever worked on have been networked targets for hackers. You develop a talent for not letting them access your systems.

I’ve also spent nearly 25 years being a volunteer political activist, much of that wielding a computer. That includes running this site.

So my systems have automated traps, notifications, scans, and logging on all levels on my systems for everything from logins to the traffic. The events that my systems flag as being more dangerous are routed directly to my cellphone. These include author logins from strange IP numbers especially for the social networking attacks by someone like Ben Rachinger.  Access to these monitoring systems is something that can only be obtained with my physical presence, my keys, and are limited to specific devices.

In other words it is damn unlikely that anyone apart from me can conceal their being able to access my systems.

While it is possible that someone could bypass all of that, but it’d cost a damn sight more and require skill levels way way above those that Ban Rachinger, Cameron Slater, or his mysterious “funder” appear to have.

But to to the point of the post, finally. As many people are probably aware, I think that Cameron Slater is a technological illiterate.

I am not. I’m pretty competent.

But the laws that bind me from hacking into systems are exactly the same as those that bind Cameron. Unlike that computer criminal, I actually obey those laws – both the ones that came in in 2003 and the ones that existed before but were made more explicit in 2003.

So if the police have no intentions of enforcing those laws protecting computer systems for irresponsible people like Cameron Slater who has been so clearly violating them, then shouldn’t they tell us?

Back before these types of laws and changes to university regulations came into being, responsible hackers used to routinely test the security on systems. It was something that I did throughout my first degree at Waikato starting in 1978.

Let me be free to access the systems I want to have a look into. I have the tools, the background in security and networks. I’d love to openly and freely hack into systems without legal retribution –  just like Cam does. I am sure that there are thousands of competent people like me in NZ here who’d enjoy doing that as well. There are several who are authors on this site.

Outside of the political sphere, there are way more non-political tech-heads who’d enjoy being given Cam’s apparent license against prosecution by the police. They would also like to remove themselves from the artificial and clearly unenforced legal restrictions that we currently voluntarily observe.

If the police don’t want to prosecute such crimes done by the irresponsible amongst us, then  why constrain the responsible?

So I ask Mike Bush and his staff to just give us a clear signal and many of us will.

A clear signal like not laying charges against Cam for clear violations of the Crimes Act would be sufficient.

After all, why should we leave the fun to well connected technological idiots like Cameron Slater and the fools that fund him? 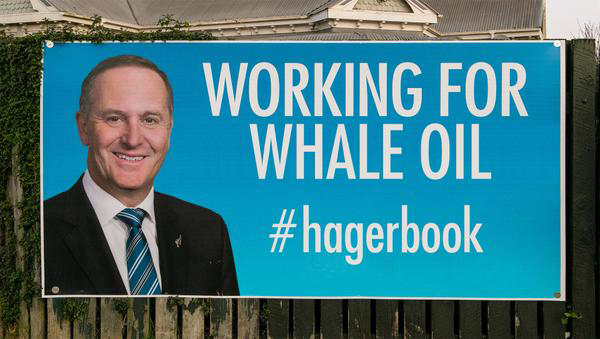 107 comments on “Charge Cameron Slater or let me hack systems ”