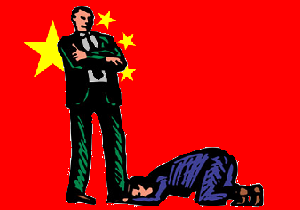 The Key government has secretly apologised to the Chinese dictatorship for allowing Russel Norman to protest new vice-dictator Xi Jinping. Since when was a peaceful protest something we apologise for? No apology from the Chinese for their security thugs manhandling one of our elected representatives on the ground of our Parliament appears to have been sought or received.

Here’s the article on China.org.cn the “authorized government portal site to China published under the auspices of the State Council Information Office and the China International Publishing Group (CIPG) in Beijing.” – ie. an official mouthpiece of the dictatorship:

A spokesman of Chinese Foreign Ministry made remarks on Saturday on a demonstrator’s harassment of a Chinese delegation outside New Zealand’s parliament building on Friday.

At the invitation of New Zealand Prime Minister John Key, Chinese Vice President Xi Jinping paid an official visit to New Zealand starting on June 17. He was warmly welcomed and well received by the government and people of New Zealand. The visit yielded positive results.

When the delegation arrived at the entrance of the parliament building in Wellington Friday noon, it was hostilely harassed by a New Zealand demonstrator within close distance.

The demonstrator’s behavior posed a threat to the security and dignity of the delegation, and far exceeded the boundaries of the freedom of speech and freedom of assembly.

Such an attempt to spoil the atmosphere of Xi’s visit and damage the Sino-New Zealand relationship is doomed to fail. It also runs against the common wish of both Chinese people and New Zealanders to enhance bilateral friendship, he added.

New Zealand has apologized to the Chinese side for the incident.

What are we coming to? Once this nation stood up to international bullies. Now foreign thugs can manhandle one of our MPs at our Parliament and we apologise? Is this what we are undr the Key government? A country that bows and scraps to bullies?

[Update: Just seen the transcript from Q+A. McCully blames Norman. Doesn’t think Chinese security was over the line. Doesn’t say they should apologise. Doesn’t tell Guyon that his government has apologised to China. Basically concludes that nothing should be done to upset a dictator ‘an important overseas visitor’ even if that means constraining the rights of our elected representatives at our Parliament:

GUYON In the last couple of minutes Minister I’d just like to turn to a domestic issue, or a domestic incident as it turned out, the Chinese security guards actually getting into something of a scuffle with the Green Party Co-Leader, Russel Norman. How did you read that incident?

MURRAY Well look I’ve only seen the media reports of it, but I find it massively disappointing. Of course we have freedom of speech in New Zealand, but that doesn’t mean we have to use that freedom of speech to cause offence to people, particularly to overseas visitors. It seemed to me that what Dr Norman was doing was calculated to give offence to the Chinese Vice President who’s an important overseas visitor. It seemed to me that he abused parliamentary privilege, because he was in a situation where no member of the public could have placed themselves, and so it was only his role as a Member of Parliament that enabled him to do so. When we have differences of views with other countries, and we do frequently, I think it’s important that we express those views in a way that is respectful and courteous. That’s what we do on a regular basis. The other political parties in our parliament do understand this, we work together to promote New Zealand’s interests internationally, and particularly in the area of trade.

GUYON Sure but is it okay Minister for a Chinese security guard to manhandle a New Zealand parliamentarian on the forecourt of parliament?

MURRAY Yeah I’m not gonna buy into what actually happened there, because as I say I’ve only seen the media reports and there’s a process I guess under way in New Zealand involving the police and others to ascertain who was to blame for that. What I’m saying is that Dr Norman shouldn’t have actually been in that situation in the first place, if he’d have shown good judgement, and if he’d have put New Zealand’s interests to the fore.

GUYON So we are not placing any blame on the Chinese. You haven’t talked to any administration officials and said hey this isn’t on?

MURRAY Oh look I’m sure that those who have been dealing with the delegation at home, they’ve had their discussions about what actually happened. I haven’t been able to participate in them, I simply make the wider point that I would have thought that a member of the New Zealand parliament, dealing with any international visitor of note, would want to avoid causing offence. I think Dr Norman went out of his way to cause it, and I think that’s an act that’s unworthy of a member of the House of Representatives in New Zealand.

[Update. The Herald reports our PM personally called the Chinese to apologise. Jaw-dropping]