Is it time for Auckland Central to really go Green?
✅✅✅ pic.twitter.com/6RDkUcC8fx

The MMP-savvy Green Party know that campaigning in the electorates increases their party vote. While it’s likely that their vote will increase this year as a result of rebuilding trust with voters after 2017, their solid policy platform, and 2017 Labour voters wanting to pull Labour leftward/greenward, it’s not a year to be complacent. And why would the Greens want to lessen their party vote anyway?

The Greens also tend to have key electorates where they run strong candidates for their own sake as well as I think working on the long game of having electorate MPs in the future.

In the past day many of the issues with vote splitting between Labour and the Greens has been covered elsewhere, I want to raise another point: having two strong left wing women standing in an electorate where the incumbent National MP has stepped down due to the own goal dumpster fire that National are still warming their hands around is potentially gold.

Demonstrations of how to do clean politics that are based on humans being respectful to each other is something we desperately need right now, and I’m hoping will be in stark contrast to the kind of politics we are most likely to get from a Collins-led National. I hope both of the leftwing women can hold that balance between competition and allyship.

Having two left wing women campaigning also increases coverage of left wing policy and values, and is another tug on the Overton Window. We should be welcoming the opportunity.

We’ve seen both/and campaigning in the Greens’ female co-leadership contest in 2018 between Marama Davidson and Julie Anne Genter, where they were in competition but that competition brought out the best of policy and both women (witness also how adults do leadership changes).

Jacinda Ardern and Julie Anne Genter in the Mt Albert by-election in early 2017 was similar. Women in particular benefit from seeing strong female representation on the left, especially where that representation isn’t in the perpetual conflict of macho politics, but this is good for all of us. 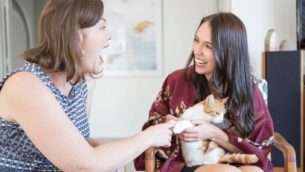 Ardern in that post-election interview,

This idea of running against someone doesn’t have to be adversarial. We both had the absolute same view that there was nothing wrong with our parties contesting – we are separate parties. But the way in which we were going to do that was in a really collegial, constructive way.

You don’t have to resolve everything, you can just agree that you’ve got different ideas. That’s OK.

One moment that was quite funny in the campaign was when I showed up at the Mt Albert train station with a bunch of volunteers, and Jacinda was there with a volunteer handing out leaflets. Initially it was a little bit awkward, but actually it worked really well. We had a great time, [Green Party co-leader] James Shaw joined me and the three of us did some selfies and handed out leaflets and engaged with the commuters.

Even though obviously both of us are campaigning for our respective parties, the reality is Jacinda and I have very similar values and vision as to what New Zealand can be like. We’re both driven by the idea that government has a key role to play in protecting and empowering people and making sure that things are fair.

That relationship and willingness to work together was further demonstrated in the 2017 campaign where Labour finally stood up with the Greens and worked to change the government. It was co-operation, not conflict-based adversarial politics, that gave us the right government at the right time for 2020.

I don’t know the Labour candidate Helen White, nor anything about whether White and Swarbrick get on or not. This doesn’t have to be a Kumbayah fest, there’s no contradiction between being strong and independent and working respectfully, it’s about offering up a different way of doing politics based in human relationships and a shared understanding of the wider good.

Swarbrick’s campaign is good for the Greens, good for women, and good for the left.  Not that  Swarbrick isn’t coming out fighting,

Nobody is entitled to anything in politics. I’ve been the underdog before, and am sure I will be again. Right now, our @NZGreens Auckland Central team runs the strongest campaign on the ground to turn the seat Green ✅✅ https://t.co/EFFqD4rIAA

I’d vote for her. This is how I want politics to be done,

All the best to Nikki Kaye in whatever she decides to set her mind to next. Talking to community across Auckland Central, it’s clear she’s been a hard-working local MP. Nothing can ever be taken for granted in politics, and leaving on one’s own terms is a powerful decision.

63 comments on “Chloe Swarbrick should stand strong in Auckland Central ”