You’re the ruling government. Which do you choose, tax cuts or teachers? Perhaps that’s a bit to vague, let’s put some numbers on it. Tax cuts for 47 millionaires or salaries for 121 new teachers? It’s not a hypothetical question. Here’s some background:

Pay rises for bosses surge ahead of ordinary Kiwis

The bosses of New Zealand’s biggest listed firms and state-owned enterprises received an average pay rise of 14 per cent in the 2010 financial year, the Business Herald’s executive pay survey shows.

For all New Zealanders, the average wage increase was just 1.7 per cent in the year to the December 2010 quarter, according to Statistics New Zealand figures. The Business Herald survey shows the mean remuneration of the 47 chief executives investigated was $1.6 million in the 2010 financial year, up from $1.4 million in 2009.

How many teachers could the government have had for $4.5 million? On the average new teacher’s salary of $37,000 I make it 121 teachers.

How can this possibly be good for New Zealand? I don’t know what the return on investment for tax cuts to 47 millionaires is (my guess is they book another holiday and spend it overseas). But I do know that every study shows that the return on investment in education is massive. For the taxes lost on 47 individuals alone, NZ could have had 121 new teachers. Or 82 practice nurses. Or…

National are making the wrong choices for New Zealand. 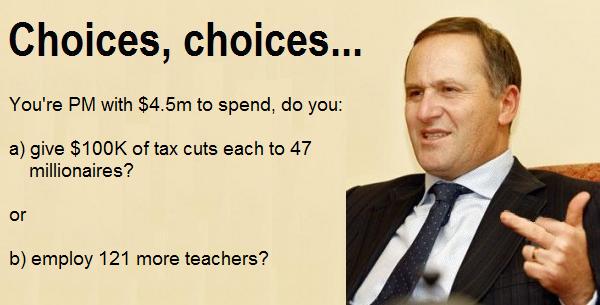