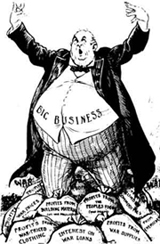 If you’d told me the Herald would use International Workers’ Day as an opportunity to preach class warfare I wouldn’t have believed you. But there’s really no other way to describe today’s editorial.

We all know the Government is running a large deficit at the moment. Of course, the deficit would be much smaller (about $2.5 billion a year smaller) if we hadn’t just had two rounds of tax cuts in six months, but that’s where we are.

I’ve already suggested that a small tax increase on the very wealthy would be a good way to make sure debt doesn’t get out of control. Now the Herald is calling for a tax increase to control debt too. Except, where I’m asking for more from those who can most afford it, the Herald wants to sock low-middle income Kiwis with the bill.

The Herald says we should raise GST to 15%. No one, not even the Herald, disputes that GST is felt most heavily by people on low incomes because they spend more of their money buying goods and services. The editorial uses typical meaningless neoliberal rhetoric like ‘broadening the tax base’ to justify it, but we can all see the real game.

The logic is simple. The Herald believes that our most vulnerable citizens, increasing numbers of them unemployed, even more working reduced hours, should have to pay more for their milk and cheese just so that those living it up on $200,000 a year can get a tax cut. It’s an absolute bloody disgrace.

For years, the Herald has been cheerleading National’s tax cuts for the rich. If it was geninuely concerned about debt it could have called for them to be reversed at any time. But it hasn’t. Instead, it’s turned around and demanded a tax increase that falls mainly on the poor. This is class warfare in its purest form.