Ever since I went to his Fabian lecture in February, I’ve been meaning to write about Rick Boven’s last major work before leaving the NZ Institute to its Business Roundtable merger.

It’s a major piece of thinking, and a piece he can be proud of signing off with.

He charts an uncertain future – one with major risks, dangers and one we’re all too little prepared for.

We’re certain to face a significantly changed climate, a world scarce in resources, over-populated and with limited leadership. 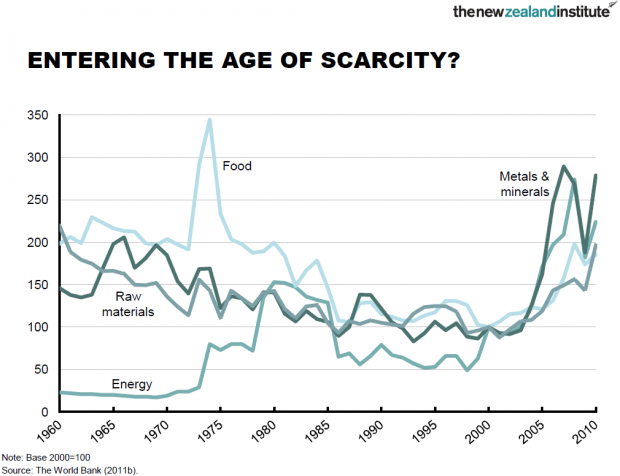 Energy predictions expect us to use much more than we do today; environmental predictions expect that not to be an option.  We’ve hit overshoot on a global scale.  Nature’s under-valued resources are already being depleted permanently.

So how does New Zealand improve its lifestyle in the midst of all this?

Although he doesn’t use the words, it sounds quite similar to David Shearer’s “Clean, Green and Clever.”  Or the late great Paul Callaghan’s presentation on New Zealand’s economic future:

But we don’t want more tourism jobs – each one of those makes us poorer, as they are worth a lot less than average NZ wealth generated from work.  Farming, fishing, forestry?  Will make us slightly richer, but won’t get us to OECD average – and it’s not like it can be scaled up much either: we’re already talking about the rest of the world being depleted, so we don’t want to replicate Rapanui here again too.

Hi-tech manufacturing is the way to go – those jobs at Google and Apple are the ones that generate teh most revenue per hour worked.

But all this sits in a gloomy world, desperate for food and technology to sustain itself.

Somehow Rick Boven maintains optimism – with the power of individuals to spread ideas and change society and make up for the leadership deficit driven by short election cycles and businesses incentivised for short-term profits.