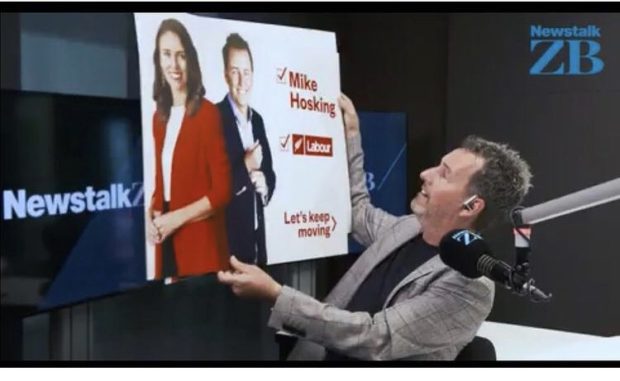 Media has been awash with discussion about Mike Hosking’s recent interaction with Jacinda Ardern.  She was invited onto his show, agreed to appear, was grilled on isolation facility beds, and gave responses.  End of story you would think.

But NZME then constructed a story out of what happened, not the actual detail of the interview, but that Hosking like a jilted former spouse then said that he did not want Ardern back on his show.

Newstalk ZB radio host Mike Hosking has asked for listener feedback on whether PM Jacinda Ardern should in future be interviewed on his breakfast radio show, saying he doesn’t “want her back”.

He said on air this morning “management and production argue she should come back on a periodic basis” but he felt Ardern “didn’t want to be here” and “are we not better on this programme … not having her on the show?”

“Give us the feedback,” he said to listeners.

Hosking this morning spoke with Ardern about the transtasman travel bubble, and afterwards expressed frustrations about the interview.

His bitterness is apparent in this quote:

She doesn’t get to pop up every now and again when the news comes out in the form of a bubble. Now to be fair to her, we did ask, and that’s the productions side of this programme and she said she would so we’re now in discussions – I don’t want her back.”

The article accused the pair of sniping at each other which is funny.  From what I heard the sniping was one way only.

Other NZME reporters popped up.  Barry Soper wrote this:

After the interview, Hosking declares he doesn’t want Ardern on his show any more, which won’t lose her any sleep given that she’d decided she didn’t want to be on it anyway.

But that was her mistake, and this was Hosking’s – he can’t have it both ways.

Hosking accusing the media of being asleep at the wheel and then refusing to take the wheel himself is cutting your nose off to spite your face.

And Heather du Plessis Allan said this on her Newstalk show:

I’ve said in the past I think the Prime Minister should front up for interviews. But I don’t know, after this morning, I can’t see the value in it,” she said.

“I’m now of the opinion if she doesn’t want to go on, fair enough. You can only push things so far.”

Let’s get the facts right.  Overblown ego throws a tanty when the Prime Minister says that she has more important things to do than appear weekly on his show, his company invites her onto his show for an interview, she agrees, answers questions, then in a fit of pique he says he will not have her back on the show.  And other employees of the same organisation then weigh in on the subject.

I bet the clicks just flowed.