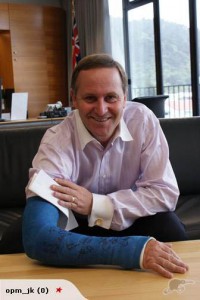 That prolific climate campaign – Sign On – has been casting its mark across the Capital, with a new motif popping up on some unlikely arms and paws.

The blue cast, which appears to have replaced Keisha and Lucy as the face of the campaign, has its origins in John’s unfortunate January faceplant.

Presumably intended to cast aspersions on John’s committment to tackling the climate crisis. (That said, there are only so many cast puns one can tolerate before one feels like breaking something).

Meanwhile an even stranger occurance – a Warehouse, Huffer and Sign On trifecta for the cause. Not sure how i feel about this…i spose uneasy times call for unusual bedfellows.