Climate change and trees – a palliative and not a solution

One alleviation that is often suggested for reducing or even reversing the effects of climate change is to plant trees, or some other form of vegetation. This is to suck up surplus carbon dioxide and to put it into a solid and relatively inert form. And it does. However to anyone who  has been trained in earth sciences or geology and who has acquired the timescales that says a thousand years is a mere blink of an eye, the idea seems ludicrous.

While in bed with some kind of bug, I caught up on my backlog of online version of The Economist. It included an article “Ravaged woodlands” talking about the effects of the warming in  the USA. It is worth reading to get an idea of the problems involved with using growing plants as a carbon store, especially during active climate shifts.

Politicised, documented and culturally sensitive, the ravaging of America’s forests is an important gauge of man’s ability to mitigate and adapt to the warming he has caused. 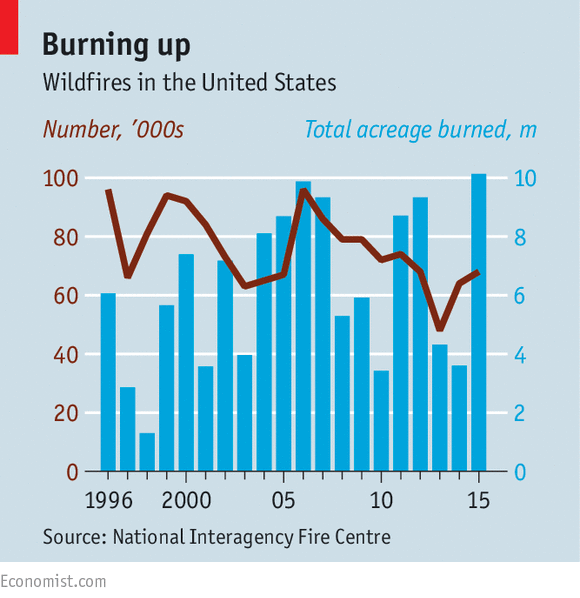 The scale of the tree loss is staggering. Last year over 10m of America’s 766m acres of forest were consumed by wildfires, sparked by lawn mowers, campers or lightning (see chart). This was the biggest area burned since 1960, when records began, despite a firefighting effort that involved over 30,000 people and cost the federal government over $2 billion.

This year’s fire season was expected to be less severe, winter rain and snow having taken the edge off a four-year drought in California and Oregon that had turned their woods to tinder. Yet it is running at par with the average of the past ten years, which include the five worst years on record. In the year to July 1st, 2.1m acres of America were razed by nearly 26,000 fires; 19 large ones are currently blazing, mainly in the West (see map). 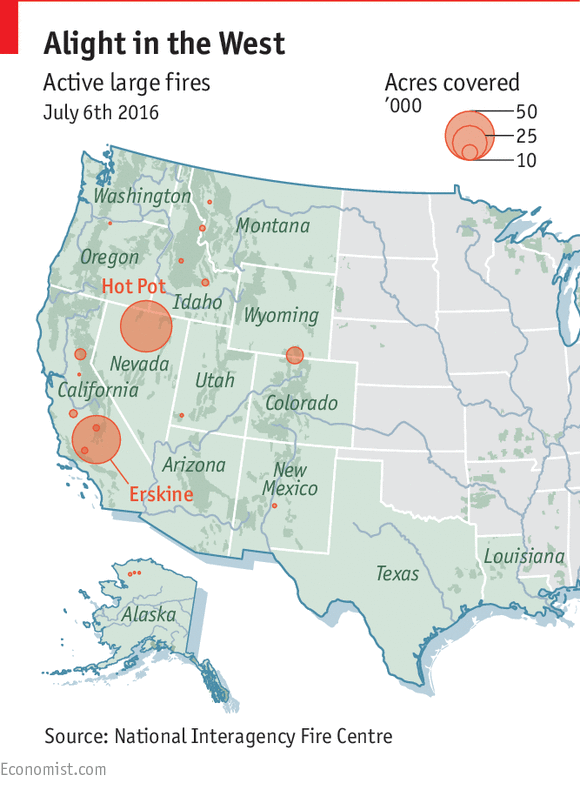 The growth of wildfires is a worldwide problem, with even bigger burns elsewhere.

Of course as well as the shifts in water precipitation and temperatures, there are also have ecological shifts that accompany them. These are just as lethal for woodlands, jungles, and most organic stockpiles of carbon.

The devastation wreaked in American forests by insects is less headline-grabbing, but ecologically as dramatic. Last month the United States Forest Service (USFS), another of the federal agencies that together manage nearly half the land in western states, said that, since October, it had recorded 26m trees killed by the mutually-reinforcing effects of bugs and drought in the southern part of California’s Sierra Nevada range alone. That suggested 66m trees had died there since 2010.

Such destruction, caused partly by warming, will itself cause more warming. Many American forests are growing denser, in part owing to a reduction in logging, which makes them a significant carbon sink. They suck in greenhouse gases equivalent to around 13% of what America emits by burning fossil fuels. Yet the USFS predicts that within a couple of decades, because of slowing growth and climate-related blights, the forests will become an emissions source.

So a bare 150 years after the start of the excess fossil carbon being blown into the atmosphere, organic carbon sinks are starting to fail. The same effects are likely to happen across most Continental areas with their harsh extremes of weather and climate. Typically in the geological history, any major shift in climate will cause significiant shifts in ecological balances and especially with large plants.

From a geological timescale, the only longer term sequestration mechanisms for carbon have been some peat bogs, areas with rapid deposition of sediments over and with organic materials, and the accretion of carbonate shells. Typically these are all formed with large bodies of water and are quite geologically slow in their storage cycles.

While there are a number of man made artificial geological sequestration techniques, they look more like aspirations than being feasible on any widespread scale.

Shorter term sequestration methods using living plants simply don’t look possible to act as anything more than a wasteful palliative. The approach is unlikely to be able to to be effective over the thousands of years that the major existing released greenhouse gases will have an effect. Climate changes themselves and the downstream economic and societal effects are highly likely to disrupt any widespread program of carbon sequestration in plants within decades rather than the centuries they’d need to operate in.

And even if we stopped excreting excess carbon into the atmosphere and oceans today, my personal assessment is that we are likely to look forward to average worldwide temperatures at the end of the century well above 4 degrees Celsius. The International Panel on Climate Change tends towards conservatism because they only look at the known or highly likely effects. Since we simply don’t know a lot about the effects of rapid climate change in human timescales, there are likely to be a more feedback effects that enhance rather than diminish the effects of climate change. Look forward to ever more rapid climate changes and extreme weather.

What we do know is that plants and soils tend not to store large amounts of carbon when they are experiencing rapid climate shifts. They usually wind up burning or dying. So for the tree huggers amongst us (like me), perhaps this would be a good time to start encouraging a nice peat bog and the trees that grow with very wet roots.