Like many people I’m always bemused by the lack of logic that the climate change deniers (CCD’s) have in their extremely selective picking of things to get wound up about.

Mostly when I see them coming through comments in this site, a few minutes thought on the basic science picks apart a myth made up of the smarter one’s selective logic. Mostly it is cherry picking the data like picking the warmest point in a climate cycle and comparing it against a low point, or mixing different datasets with their measurement errors together. And those are the smart ones. The faith and conspiracy based ones are frequently unwitting comedians.

But one of the common threads that they have is that they all think that the IPCC reports are wrong, or if they are fence sitters, will only refer to the lower estimate bounds  in the IPCC’s AR4 reports.

But I’d have thought that a major variation from predictions in the AR4 and even the unpublished AR5 reports would have attracted their wonted bile about the organisation. But apparently I was wrong. I guess that they prefer to ignore reality. At the US National Snow and Ice Data Centre there is this understated post “A most interesting Arctic summer”

This figure shows the observed September sea ice extent for 1952 to 2011 (bold black line) and extents for 1900 to 2100 from the CMIP3 models using the “business as usual” SRESA1B greenhouse gas emissions scenario (the blue line averaging results from all of the model runs with the blue shading showing the +/- 1 standard deviation of the different model runs) and from the CMIP5 archive, using the RCP 4.5 scenario (pink line and pink shading). The darker pink shading shows where the simulations from CMIP3 and CMIP5 overlap each other 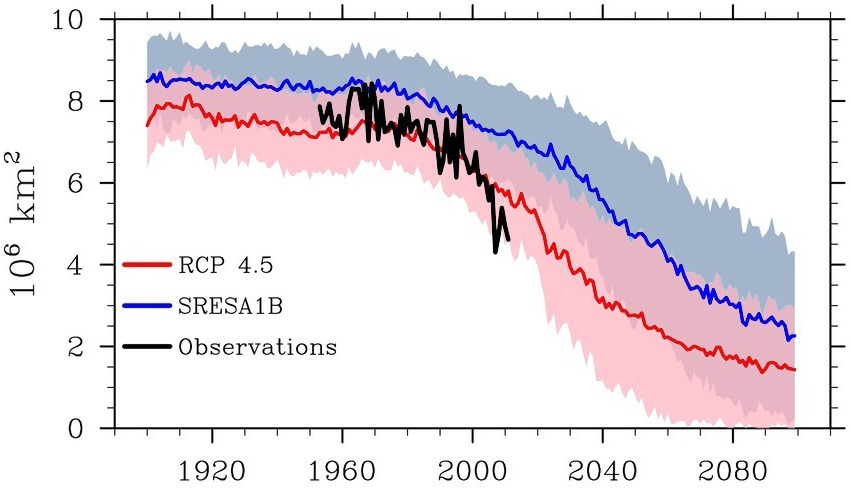 It looks to me like the north is going to lose a major buffer against major climate change over the next couple of decades. This has been the most extreme wasting of sea ice extent that that has been observed so far because it has been so even throughout the summer unlike 2007. 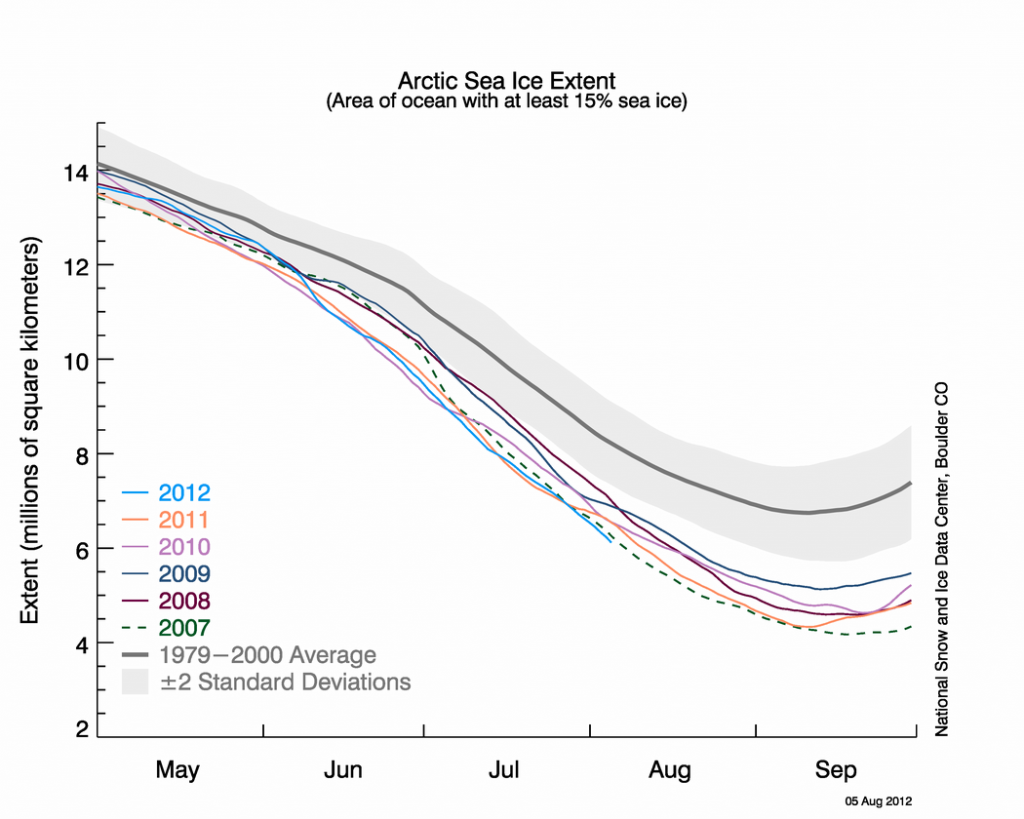 A similar effect is showing up in the Greenland ice melts

..the daily, cumulative area of the Greenland ice sheet showing surface melt for 2012, 2011, 2010 and for the 1980 to 1999 mean. While melt was unusually extensive through May and June of 2012, the melt area increased rapidly in early July in response to an unusually warm weather event.

The polar and sub-polar regions quite literally act like a buffer soaking up summer heat against the stored ice and snow accumulated over winter. Like oil we start with an reserve of ice accumulated over geological time. Like oil we are wasting a valuable resource by burning through it with no more thought than the CCD’s put into their “skepticism”.

But the real importance in the near term is what effects this rapid change will have on northern climates. Have a look at this article “Arctic Death Spiral: How It Favors Extreme, Prolonged Weather Events ‘Such As Drought, Flooding, Cold Spells And Heat Waves’“. But the shortest summary is from Gareth at Hot topic when looking at the image of the ever shrinking Arctic sea ice. 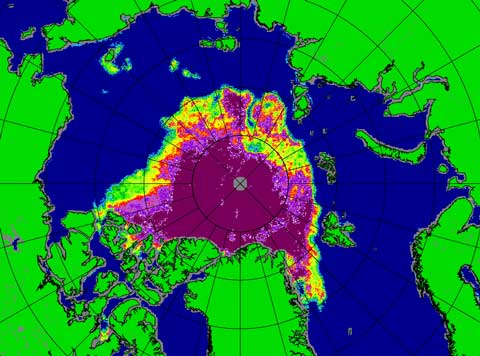 Let’s put it simply. When all that blue ocean in the picture above starts to freeze, it is going to give up heat to the atmosphere. A lot of heat. An enormous amount of heat. A decade ago, that didn’t happen to anything like the same extent. That heat has to go somewhere, and it goes into changing the way the atmosphere moves around the northern hemisphere. Look out for interesting winters in Russia, Europe and north America this year and in years to come.

For people than want to look of known mechanics of the transition between sea ice climate shifts and weather, then watch this video from Jennifer Francis of Rutgers University as one of the authors explaining the work in a 2012 Geophysical Research Letters study, “Evidence linking Arctic amplification to extreme weather in mid-latitudes,”. The paper finds that the loss of Arctic ice favors “extreme weather events that result from prolonged conditions, such as drought, flooding, cold spells, and heat waves.”.

What is worrying me is that we appear to be seeing the current ocean systems around Antarctica shifting. Since they are the only thing preventing the deep freeze there from opening up… But that is the subject of another post.