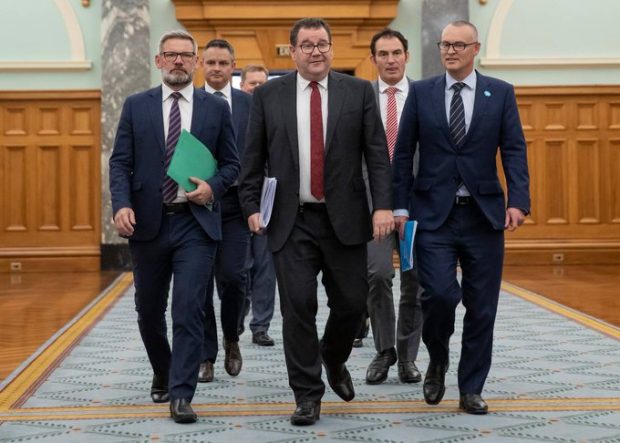 This government must demonstrate that it has the ability to lead the New Zealand economy where it has stated it wants it to go. It does not want more headlines like the average house in Auckland now being priced at $1 million.

With the Reserve Bank off the chain, there’s no sign of that ability to lead much.

The concern that the Reserve Bank chose to provide another $28 billion in unrestricted loans to banks has caused left and right to unify in concern this week. That’s how bad it’s got.

To get to Dr Cullen first.

Dr Cullen is really clear that the Reserve bank is not only misdirected and out of control, but also that the Minister of Finance doesn’t appear to have the will to alter their course. The changes to the Reserve Bank Act in 2019 gave the government the power to direct the Monetary Policy Committee to pursue other objectives than price stability and ‘maximum sustainable employment’. Dr Cullen says that “to use this new power is, essentially, the nuclear option in the operation of monetary policy.”

The Minister of Finance and the Governor of the Reserve bank both signed this remit last year of the Monetary Policy Committee on a single page. This joint statement says:

Our priority is to move towards a low carbon economy, with a strong diversified export base, that delivers decent jobs with higher wages and reduces inequality and poverty.”

Dr Cullen is pointing out that when the Reserve Bank is deliberately putting untagged money into this economy, the result is to make a housing price boom even worse. It’s not achieving any of the government’s stated economic aims.

Now, I sure ain’t slagging the Reserve Bank off at this point. Pretty much everyone near a bank was pretty happy that the Governor Mr Orr intervened to provide stability in providing $30 billion to banks in March this year.

That March intervention shows that the Reserve Bank can and does act to restore financial stability to banks being able to actually get debt to lend. But having used the “nuclear option” once, as Dr Cullen puts it, it doesn’t want to stop pressing that big red button again.

Through 2020 plenty of people from left and right have talked about quantitative easing as a great way to form a new orthodoxy for running an economy. We were supposed not to worry about flooding new debt into banks because rapid inflation was dead. But what’s happened is that fresh mortgage money has caused hyper-house-inflation. House prices are going up so fast that they are stripping New Zealanders of their last hope of financial independence.

We are way, waaay overdue an economic summit that enables the government to show that it actually has the collected powers remaining to lead this economy and this country towards its economic goal stated above. That doesn’t mean entirely breaking the independence of the Reserve Bank of New Zealand. It just means showing that you have the capacity and will to engage hard with the problem: to show you can form policy with public debate that prepares the ground for large policy changes.

As Dr Cullen notes in his column, what was considered orthodox in the operation of monetary policy has moved a long way since 2008. That there is no economic policy brains trust operating at the top of this government is screamingly obvious right now: even an old medium-dry like Dr Cullen is sounding fresh at this point.

Which brings me back to National’s Andrew Bayly. His statement about the need to rein in the Reserve Bank sounds remarkably like a progressive from the Labour Party wrote it.

Because there is no requirement for that $28 billion put into the banking system to flow into productive parts of the economy, the new funding “will flow straight into the already unaffordable housing market, when it could and should go towards new house builds, local business and our agriculture and horticulture sectors.”

It is the view of the National party that “the Reserve Bank can, and should, be requiring banks to direct this new funding into productive parts of the economy, particularly business lending. We have seen this happen in Australia.”

The Australian Reserve Bank governor foresaw the risks of Quantitiative Easing and set them out in November last year. He saw a blurring of lines between monetary and fiscal policy as an issue if the central bank was buying large amounts of government debt at zero interest rates could be seen as money-financed government spending. “This could damage the credibility of a country’s institutional arrangements and create political tensions. Political tensions can also arise if the central bank’s asset purchases are seen to disproportionally benefit banks and wealthy people, at the expense of the person in the street.”

He was also quite clear with the Australian Federal and State leadership that they needed to stop propping up businesses with wage subsidies and start investing in actual projects with actual jobs with a focus on infrastructure projects, maintenance of existing assets, and spending on skills. In other words, use debt for productive stuff not used for more property investor mortgages.

Our RB must heed that and do the same. Now, of course we can say that because house prices also rose under both Dr Cullen and under National that we should just discount their opinions. But they are both right. As is the Australian Reserve Bank Governor.

We don’t have to put out an amateur wish-list of what we think will solve the housing crisis. We do have the right to say to both Minister Roberston and Adrian Orr: stop trying to put out a fire with gasoline.

We should pay greater heed to Dr Cullen that Andrew Bayly because Dr Cullen had the policy chops to face massive financial challenges and help solve them for most of us with far-sighed initiatives.

Dr Cullen pushed for the creation of the New Zealand Superannuation Fund. This recognised the risk associated with our current system where universal retirement superannuation benefits are funded by the current working population. The fund has developed into a well-respected and well-performing sovereign wealthfund which has set a high standard in socially responsible investing.

He pushed for the creation of KiwiSaver. He recognised that a widespread employment-based savings scheme was the best way to help Kiwis save for their own retirement. It incorporated the latest behavioural finance thinking in its design – incentives without compulsion. Over half of New Zealand now has a Kiwisaver account, and collectively we have amassed nearly $60 billion in or Kiwisaver accounts. It has provided so many New Zealanders with the opportunity to build a diversified investment base and take responsibility for much more of their own retirement.

This government hasn’t tried any structural policy innovation even close to what Dr Cullen has done.

More leaders are stating strongly that it’s time they showed they can. And will.