It’s strange watching National’s factions fight it out in the media- the Herald on Sunday running the Collins/Slater faction stuff and the Dompost running material from Boag/Pullar. Both sides are scum. Pullar received (somehow) the largest leak in ACC and passed to the media. Collins has imitated her fellow ministers by leaking Pullar’s private details in revenge.

While Pullar and Boag are undoubtedly acting disgracefully, its Collins’ behaviour that’s more important. She’s a Cabinet Minister with access to privileged information. Collins’ leaking of Pullar’s name and the  facts of her income protection insurance (it’s clearly her, ACC wouldn’t do it). Collins’ position as minister gives her access to a mountain of private and sensitive information, with that comes an absolute responsibility not to release that information without permission. 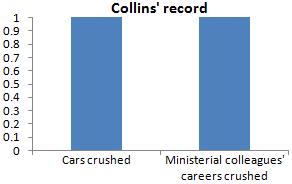 Oh, and don’t forget, that Collins’ leak of Pullar’s information led to Nick Smith’s resignation. That’s one hell of an own goal.

If Collins wants to claim that Pullar’s information isn’t coming from her, then she should launch an inquiry to find the leak within ACC.

Here’s what the Cabinet Manual has to say on improper release of official information:

Improper release or use of official information

8.6 If official information is released without authority, a range of responses may be considered, depending on the circumstances. These include:

8.7 Sections 78A of the Crimes Act 1961 and 20A of the Summary Offences Act 1981 create an offence, in certain circumstances relating to the security and defence of New Zealand, of improperly disclosing or retaining official information.

8.8 The use by an official of official knowledge for private gain or benefit of others, even if not involving the disclosure of information, is an offence under section 105A of the Crimes Act 1961.

2.53 In all these roles and at all times, Ministers are expected to act lawfully and to behave in a way that upholds, and is seen to uphold, the highest ethical standards. Ultimately, Ministers are accountable to the Prime Minister for their behaviour.

Maybe, when Key’s finished making a dick of himself and pathetically trying to get some of Obama’s glow to rub off on him, he’ll get around to holding Collins to account.