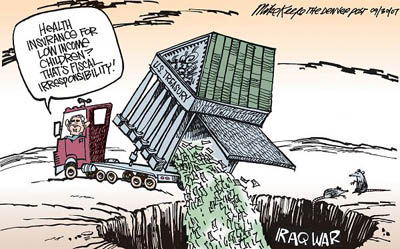 Paul Krugman of the New York Times reports that “On Wednesday, President Bush vetoed legislation that would have expanded S-chip, the State Children’s Health Insurance Program, providing health insurance to an estimated 3.8 million children who would otherwise lack coverage.”

He goes on to cite numerous instances where Republicans appear to think that if people are poor or sick or lack health insurance it’s a laughing matter.

Here’s what Reagan said in his famous 1964 speech “A Time for Choosing,” which made him a national political figure: “We were told four years ago that 17 million people went to bed hungry each night. Well, that was probably true. They were all on a diet.”