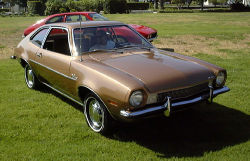 Anyone remember the Pinto? Arguably not Ford’s finest hour. When in 1968 it became apparent that the Pinto’s defective fuel tank could result in the car catching fire when hit from behind, Ford executives reached for their calculators.

Some quick sums (from a leaked memo) showed that the costs of fixing the Pinto were around $150 million, while settling cases where injuries occurred was likely to total closer to $65 million.

Striving to maximise shareholder profit, Ford executives allegedly chose to continue to manufacture the defective cars, at a saving of around $14 per car, and instead pay out on the expected death and injury lawsuits. Ford avoided criminal charges but, predictably, the memo did a lot of harm to their brand.

Fast forward to today (and only 27 Pinto-deaths later) and Mazda, in which Ford has a controlling interest, is faced with a not dissimilar problem. On the face of it, they appear to have learnt from the Pinto case. They’re busy pioneering ‘accelerated destruction methods’ for nearly 5000 brand new, but suspect, vehicles.

It all started about two years ago, when a ship carrying 4,703 shiny new Mazdas nearly sank in the Pacific. The freighter, the Cougar Ace, spent weeks bobbing on the high seas, listing at a severe 60-degree angle, before finally being righted.

The mishap created a dilemma: What to do with the cars? They had remained safely strapped down throughout the ordeal — but no one knew for sure what damage, if any, might be caused by dangling cars at such a steep angle for so long. Might corrosive fluids seep into chambers where they don’t belong? Was the Cougar Ace now full of lemons?

The Wall St Journal has the full story.