Covid-19 lessons from a plagued flight

In September there was a 18 hour flight Dubai that ended in Auckland. A relatively close group on that plane showed infection after arrival, and a genetically similar version. The evidence of in-flight infection is very strong and points to the on-going issues with shipping virus hosts around the world. This has some pretty strong implications for long-haul flights in particular. But also to the risks of having travel ‘bubbles’ without enforced quarantine.

On September 29, 2020, flight EK448, which originated in Dubai, United Arab Emirates, with a stop in Kuala Lumpur, Malaysia, landed in Auckland, New Zealand. During the required 14-day MIQ period, 7 passengers who had traveled on the flight received positive SARS-CoV-2 test results. The 7 passengers had begun their journeys from 5 different countries before a layover in Dubai; predeparture SARS-CoV-2 test results were negative for 5 (Figure 1). These 7 passengers had been seated within 4 rows of each other during the ≈18-hour flight from Dubai to Auckland. Because recent studies have reported conflicting findings of the risks associated with in-flight transmission (2–4), we undertook a comprehensive investigation to determine the potential source of infection of these travelers.

There is a lot of information in the early release article about the process of the travel of the people infected and of the flight. Reading through it, there are some obvious possible holes like mask and glove wearing on the flight. The 2 hour refuelling stop over in Kuala Lumpur had no passengers on or off. However it did have a auxilary power unit off for 30 minutes during that time, and therefore no environmental control during that period – a possible contributing factor.

The abstract states (my italics) in its conclusion..

Among 86 passengers on a flight from Dubai, United Arab Emirates, that arrived in New Zealand on September 29, test results were positive for 7 persons in MIQ. These passengers originated from 5 different countries before a layover in Dubai; 5 had negative predeparture SARS-CoV-2 test results. To assess possible points of infection, we analyzed information about their journeys, disease progression, and virus genomic data. All 7 SARS-CoV-2 genomes were genetically identical, except for a single mutation in 1 sample. Despite predeparture testing, multiple instances of in-flight SARS-CoV-2 transmission are likely.

For me the figures in the article are the most explanatory. So I’m going to put them up. 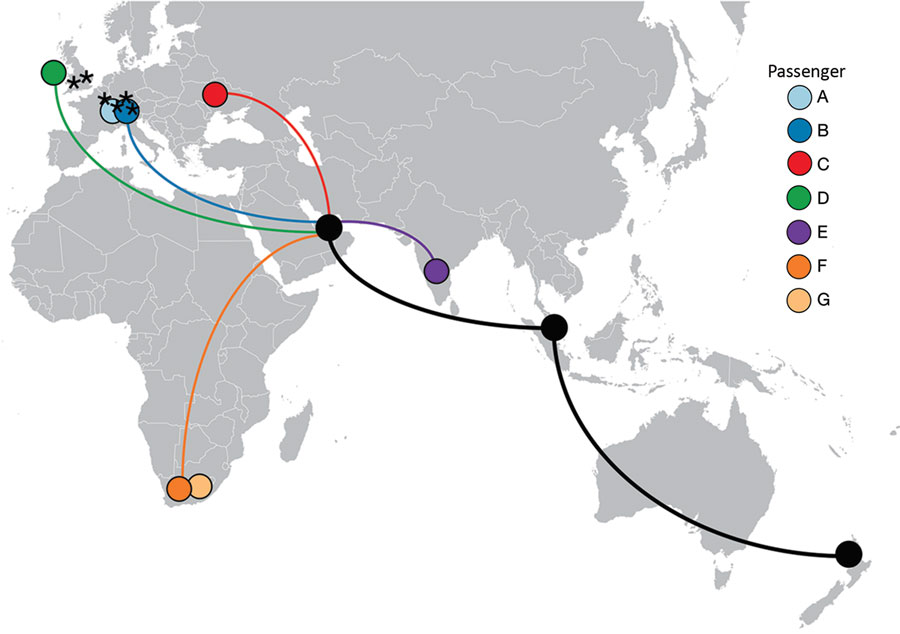 Figure 1. Countries of travel origins for 7 passengers who tested positive for severe acute respiratory syndrome coronavirus 2 infection after traveling on the same flight (EK448) from Dubai, United Arab Emirates, to Auckland, New Zealand, with a refueling stop in Kuala Lumpur, Malaysia, on September 29, 2020. Asterisks indicate where 6 other genetically identical genomes have been reported

The most notable part of the image is the diversity of locations that the infected passengers came from. The probability of having the same covid-19 genome is very low. But the likely incubation times and times of the tests is even more interesting.

As is the positioning of these seven passengers in a spaced out flight. Not to mention the locations of the passengers who didn’t get positive tests. Look at seats 24E, 24G and 28D and 26C – obviously either very lucky or had very nasty immune systems. 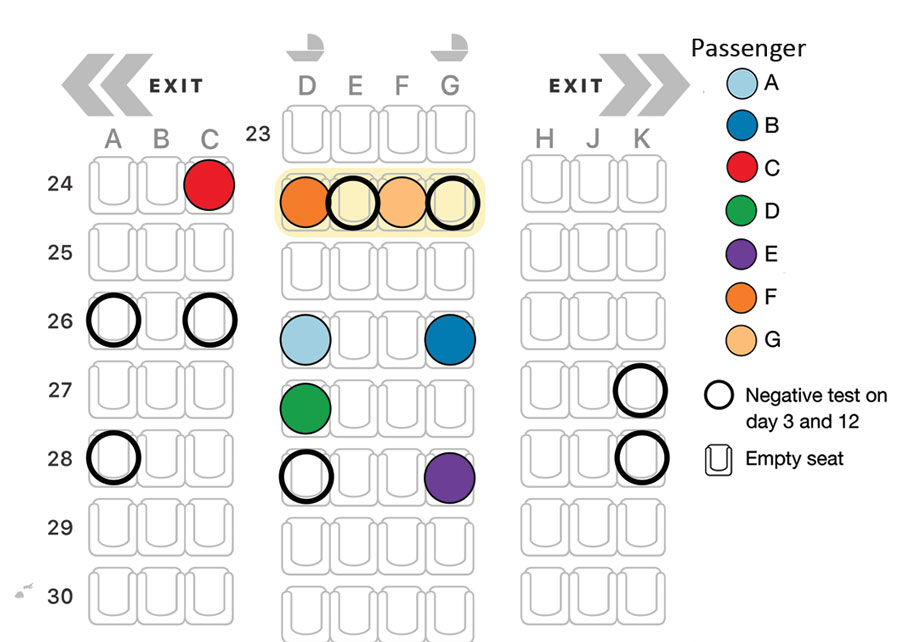 Figure 3. Seating arrangement (Boeing 777–300ER) for 7 passengers who tested positive for severe acute respiratory syndrome coronavirus 2 (SARS-CoV-2) infection on flight EK448 from Dubai, United Arab Emirates, to Auckland, New Zealand, with a refueling stop in Kuala Lumpur, Malaysia, on September 29, 2020. Passengers F and G interchanged seats within row 24. Open circles represent nearby passengers who were negative for SARS-CoV-2 on days 3 and 12 while in managed isolation and quarantine. All other seats shown remained empty.

Figure 4 is the analysis genomic family. It is a extremely close match, especially from a group from such diverse locations.

The final figure is quite interesting as it uses the anticipated times and seating to try to look at possible transmission paths. Look at it in conjunction with figures 2 and 3. 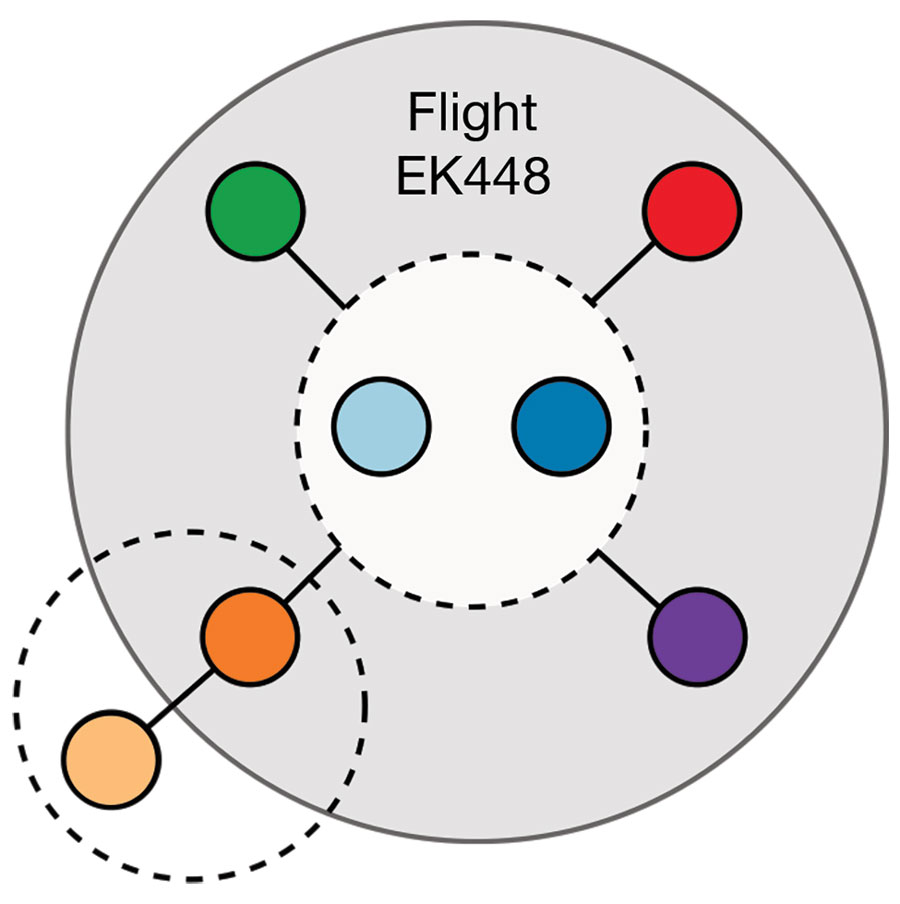 What is notable from this is that it shows the several notable characteristics of this disease.

It is infectious, but nothing like the same order as influenza. In an 18 hour flight even with precautions, a more virulent infection would have probably infected more people in the immediate vicinity. In particular the pattern in row 24 with the two people not getting a positive result is pretty abnormal.

The preflight checks were essentially useless and probably gave a false sense of security for both crew and passengers. That is my primary dislike for such tests – people can and will get tests both before getting infected and also return negative results if they have just been infected. On a long haul flight, they will infect others. The time taken before the disease is detectable by symptoms or test compared to the time to become infections is such that it is really hard to detect for flight onboarding.

That is the primary reason you won’t get my 61yo body in a long haul aircraft anytime soon. They are the ideal infection canisters for covid-19, if not on the way out, then on the way home again.

The same considerations apply for local no-quarantine travel bubbles where there are repeated unexplained community outbreaks – such as we have been seeing repeatably in Australia. Someone who is infected can be happily walking around after testing negative, and without a strong receiving quarantine infect others in-flight or after arrival.

Bearing in mind the financial and economic costs of suppression in the order of what we or the Australians have done to date, and the much smaller costs of strong border controls – this is a economic no-brainer for the country as a whole.

Incidentally, for an individual to have a vaccines don’t make as much of a difference as you’d expect. Ignoring the time to them becoming effective (a not inconsiderable consideration). Then even when and individual is fully vaccinated they are better at stopping the infection from spreading inside the individual than they are in stopping others being infected. The reason is that the bodies defences have noticeable delays at suppression after infection, and many if not most vaccinated people will be infectious.

Personally I don’t want to fly until I’ve had a chance to see what happens in the real world with vaccines in my age group. I sure as hell don’t want vaccinated Aussie tourists or returning kiwis here without quarantine until both countries have a sufficient induced population immunity to reduce the risks to an acceptable level. Certainly not to benefit airlines. tourism operators, and universities. After all they’re not paying me anything to negate the risks I would carry for them.

Just as importantly, this demonstrates the diagnostic utility of getting genomic analysis correlated with travel patterns.

There is more analysis in New York Times “One 18-Hour Flight, Four Coronavirus Infections“. However the title seems like a somewhat optimistic reading of the evidence.

22 comments on “Covid-19 lessons from a plagued flight ”