The history books will regard Jacinda Ardern as something of a political freak.  Someone who took over Labour’s leadership shortly before the 2017 election at a time where it looked like Labour may be replaced by the Greens as the second biggest party.

She campaigned like a trojan, showed Mike Hosking to be an utter twat, which he has never forgiven her for, and led the party to an unlikely victory.

She then led the country with real grace, responded magnificently to the Christchurch massacre and through the White Island disaster.

Then Covid hit.  Jacinda’s leadership and the refusal to sacrifice lives for convenience was exceptional and we found ourselves in quite a unique position where, compared to the rest of the western world, we lived normal lives the sort that other nations could only dream of.  And our body count was and remains so low compared to the rest of the world. 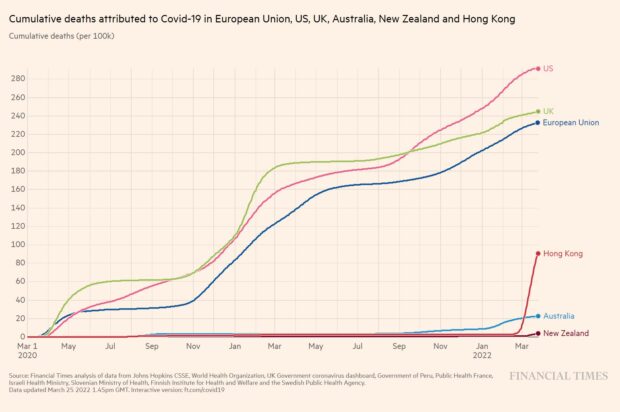 Initially her performance was met with accolades.  Gradually the euphoria has dimmed.

The reasons are understandable and predictable.  After two years of living on the edge enthusiasm was bound to dim.  Further incursions and lock downs have effected the collective mood, even though two of them were seen off and Delta was in the process of being sent off when Omicron hit.

And the opposition and its blow hards in the media has succeeded in sapping morale.  Relentless attack after relentless attack has gradually changed the public mood and and gradually caused some to question the handling of the pandemic.

But you have to question their logic.  Fancy in the middle of the current crisis advocating for the removal of the Traffic Light system.  National’s laissez faire instincts, that governments should do nothing, are clearly showing.

It does not matter how often you point to the body count, or to the abundance of free RAT tests, or to the success of the MIQ system, or that our health system has not been overwhelmed like pretty well every other country, or to the resilience of the economy, the opposition’s rhetoric has been relentless and has sapped some support from Labour.  Perception trumps reality every time.

Voices for Freedom and its ilk is also having an effect.  If your organisation is banned from Facebook it means that the veracity of what you say is clearly lacking.  Yet for a small group of logic resilient people VFF can do no wrong.

Its resourcing is impressive.  It still has not released information on how it is funded and the promised transparency is clearly lacking.

And businesses who have continuously attacked Ardern and called for lockdowns to end should reflect on how wrong they have been.

From this weekend’s mediawatch:

“It goes back to magical thinking about what the alternative was to elimination or tightly controlling the virus. It was never going to be ‘sure the hospitals are full, and sure, 1 in 20 people in the city has Covid right now that we know of, but I’m still going to go out and pretend there’s nothing different from 2019’. It was always going to be ‘well hang on, there’s a pandemic, I’m going to do things a bit differently’. Congratulations, we opened up. This is living with Covid.”

The country is the midst of a full blown omicron hit but it is similar yet different to what has happened overseas.

Compared to Australia our peak looks similar.  But their absolute catastrophe of a roll out of rapid antigen tests must have affected the collection of their data.

Here is the new case comparison on a per capita basis: 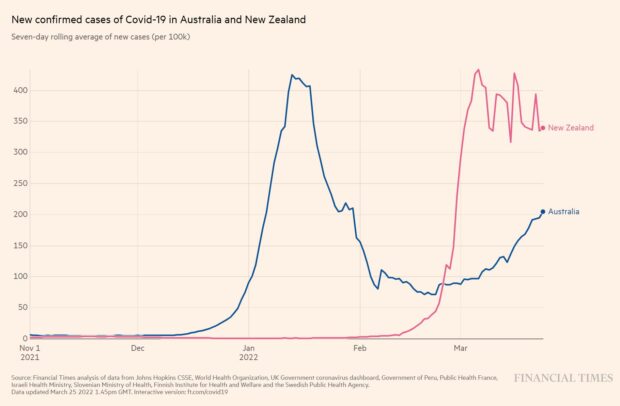 And here is the death comparison on a per capita basis: 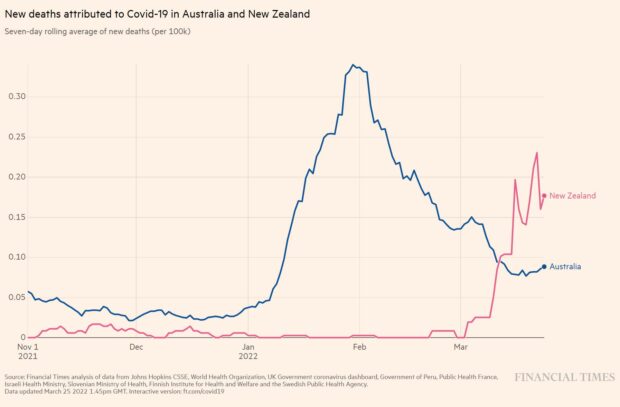 Yesterday in Aotearoa total new cases were 10,239 and there were 1,886 new cases in Auckland.  The number of people in hospital has reduced from over a thousand to 848 in the past week.

And it is not as if our arrangements have been more stringent than others. What is the cause of our success so far?  It helps that we had time to see what was happening overseas and each time the response was deft and science based.  MIQ bought us important time. Eradication was clearly the right thing to do pre Omicron.

It is clear that our vaccination rates have helped significantly.  This may be an unpopular opinion but the mandate system has incentivised vaccination uptake to levels I did not think possible.

The Covid death rate is getting similar to the road death rate.  The desire to go back into lockdown, while understandable at one level, is not something that most of the population would tolerate.

The primary point of this post, and I will repeat it, is that Jacinda Ardern has burned significant political capital on dealing with Covid.  But it is something that a responsible Political leader, of which there are few, would do.

141 comments on “Covid and political capital ”